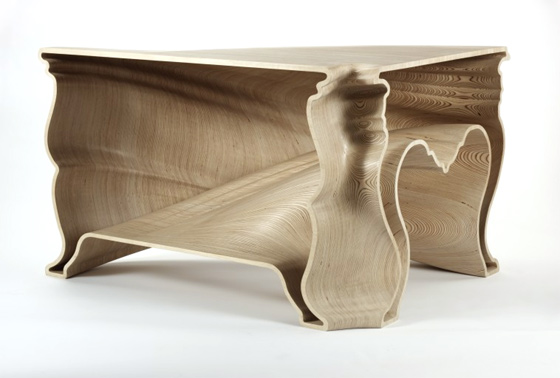 The Cinderella Table is an exploration of the possibilities of CAD-CAM (computer-aided design and computer-aided manufacturing). Objects are increasingly designed digitally, on screen, and the files that describe them in two dimensions on the computer are the same files that are used to control the machines that make the objects too. Because human intervention, interpretation of a design and handcraft are omitted, fault-free three-dimensional versions of digitally designed objects are possible. CAD-CAM would appear to negate the individualism of craft objects. But Verhoeven wanted to use CAD-CAM as (in his words) a ‘new modern craft’ because he felt it was ‘hiding a craft’ within it. 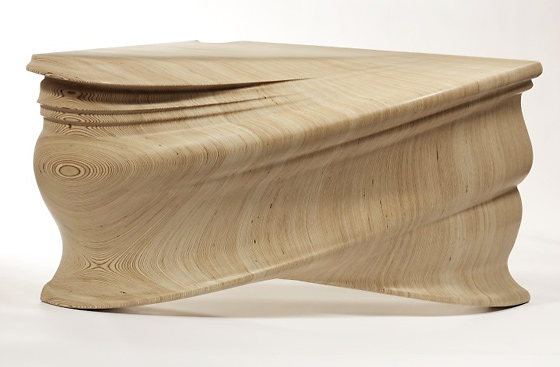 This process took three months to perfect. The virtual design was ‘sliced’ and each of the 57 slices, each 80mm thick (a total of 741 layers of plywood), was fabricated by CNC (computer numerically controlled) cutting machines, working on three, and sometimes five axes. Each slice was cut from the front and from the back to perfect the curves and undercuts, pushing the boundaries of the technology. All the slices were assembled and the entire object, which is a hollow plywood form, was finished by hand.

Read more at the Victoria and Albert Museum.

Filed under: art, cnc — by jeff

Comments Off on CNC Furniture Design by Jeroen Verhoeven