Earlier this month, we shared about musician and robotic instrument maker Patrick Flanagan’s “part human, mostly robot, electro band” called Jazari and his EP for “The Human Element” that featured some of his custom-built instruments and robotic performers.

Well, he sent us an update with more behind-the-scenes details, including how he uses our LED Illuminated Pushbuttons in his work:

I just posted my tech talk video that describes how the controller works with the drum machines.

And I did a blog post about some of the problems I encountered while building the controller, gave your awesome square LED arcade buttons a shout, and posted my Arduino code.

Here are more details from his site about the Meganome:

The Meganome is inspired by the monome controller and powered by an Arduino Mega. Like other grid controllers like the Launchpad and Push, it has performance modes for triggering drums, playings synths, and launching clips and effects. I like the feel of arcade buttons and look of exotic hardwoods, so mass-market products just weren’t right for me.

Check out Patrick’s blog post with links to source code and more here! 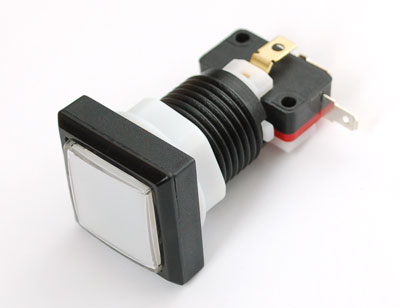 LED Illuminated Pushbutton – 30mm Square – A button is a button, and a switch is a switch, but this LED illuminated arcade buttons is in a class of its own. It’s similar in size to an arcade button (and will fit in holes drilled for ‘standard’ 30mm buttons) but has a built in LED that can be controlled separately from the switch action – either to indicate or just to look good. (read more)

Filed under: arduino, music — by jeff