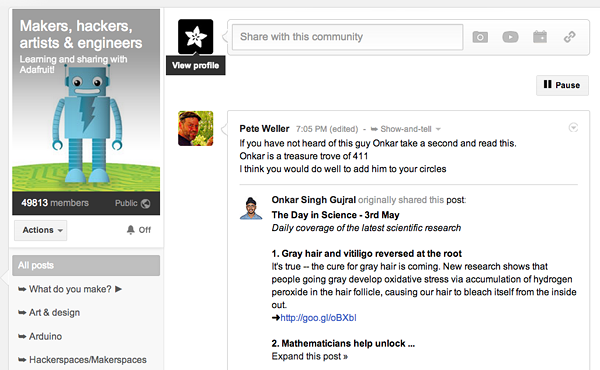 There are people making amazing things around the world, are you one of them? Join the 49838 strong! And check out scores of projects they shared this week after the jump!

Don’t miss the chance to catch up with great pieces from the community from this week! Click the link below! 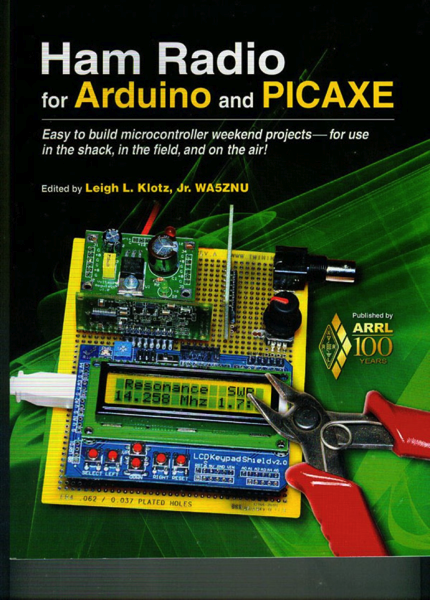 Ham Radio enthusiast Mike stopped in to share about a bunch of new electronics projects in progress for the upcoming Maker Faire Bay Area, and also shared a book, Ham Radio for Arduino and Picaxe edited by Leigh L. Klotz, to which he had contributed two chapters. Another member of the community shared a postive book review of the book in the Adafruit forums a few weeks ago, so we had already shared about the book here! (read more) Featured: 4/27/2013!

Martin Atkins made this fun #adafruit6secs video to show off more of his “radiant mural” project he shared on Show and Tell a few months ago. And here is a longer video of it in action: “Chasing the LED Matrix.” (read more)

Call For Entries: The Adafruit 6 second electronics film festival! Share your cool project in 6 seconds of video and win up to $600 at the Adafruit store, with six runners up winning $60 store credit each. In a 6 second video, we want you to share the best project you’ve made. Be sure not to use any copyrighted music, video, etc. This should be all your project, all by you. The Adafruit team will be looking on Twitter, G+/youtube and beyond for Vines, 6 second videos and more tagged with #adafruit6secs. The deadline is 6pm ET, 5/6/13. The Adafruit team of judges will pick their favorites and announce the winner on May, 12th at 6pm ET.

tl;dr – Post a 6 second video of your electronic project(s) using Vine on Twitter and tag it #adafruit6secs! (read more) 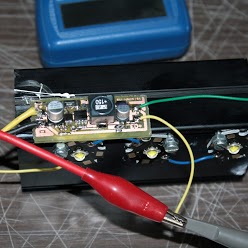 Jochen Hebeler shared: “I build a 3A constant current source based upon a LM3409. The total size of this PCB does not exceed 50mm*30mm and is working. I have to say, it is pretty damn hard to solder such a MSOP-10 chip ;)” (read more) 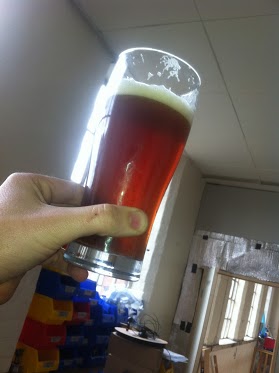 Phenoptix raises a glass: “The third office brew but first with me (+Ben Gray) as brewmeister. Gray’s Scarlett – Ruby Ale. Very pleased with the result, yeast bed is a bit active but it’s got great natural carbonation and a nice sweet foretaste and good bitter aftertaste.”
(read more) 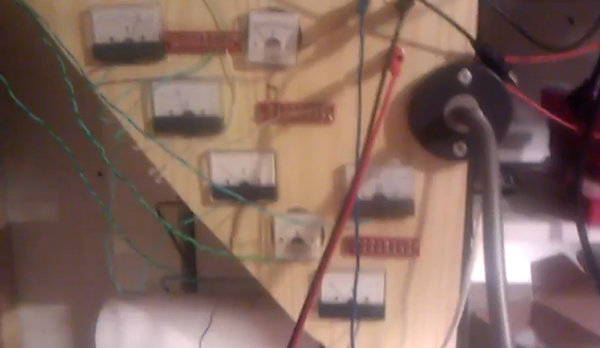 Hippy Nerd shared a cool animated schematic: “because its kinda hard to explain with words. It came out kinda neat. (sorry about image quality, the web version isnt as clean as the original.” (read more)

Kevion McGinley shared: “This is a compact (3k including resources) SSD1306 tile pseudo-graphics library I’ve been working on for the last week or so. It’s more or less feature complete and stable…ish at this point, so I figure it may be useful for others working with lower-end micros.” (read more) 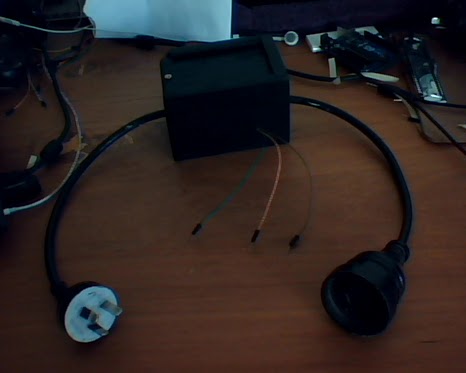 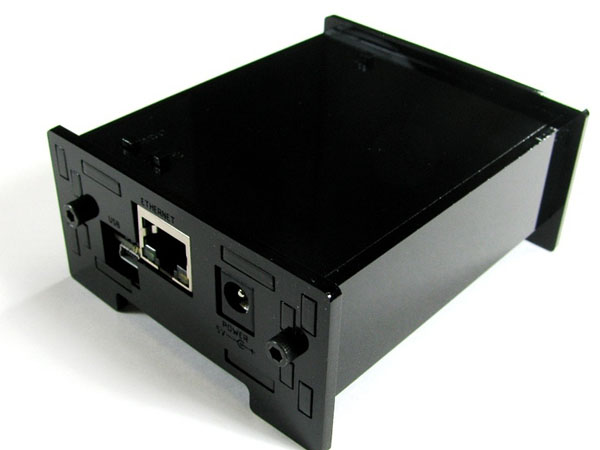 Craig “builttospec” shared a new BeagleBone Black Enclosure on Thingiverse: “for those that want to give their new embedded computer a good home.” (read more)

Roberto Marquez shared scrolling text on a 32×32 RGB LED matrix with fonts: “This is done with an Android IOIO, controlled via Bluetooth from a PC, driving a PIXEL.” (read more) 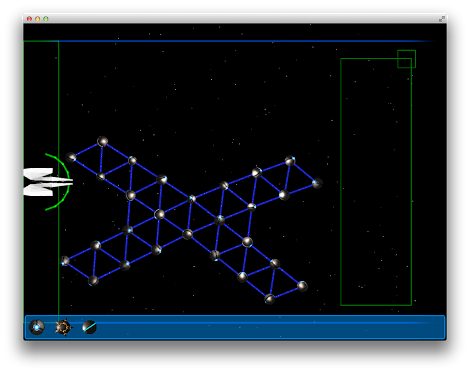 Samuel Williams shared about progress with a games project: “The main reason to keep track of connectivity is efficient edge removal when shield balls are destroyed. When the ball is destroyed, simply find all connected balls, then destroy all edges for each pair of balls. I was thinking it might be interesting to write a dual-key hash table, where it is possible to have multiple keys pointing to the same value, along with the ability to query the hash table with either key to get a sub-set of edges, or both objects to get a unique edge. However, while it might save space and perhaps have a better constant factor speed, it would be the same O(1) operations per edge.” (read more) 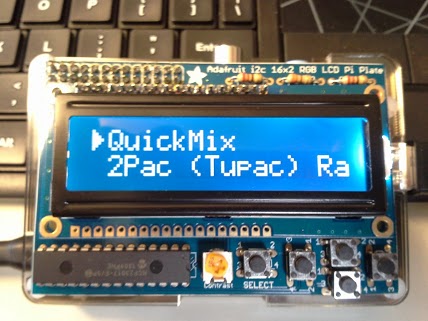 Cart V Wood followed our tutorial to put together a Pi Wifi Radio — and then wanted to keep hacking: “I wanted to make mine portable, so I used a VAAS 5000mah battery pack (got two off Yugster last week), a Model A Pi, a Tenda PICO wifi adapter and a super short Belkin USB to Micro USB cord I had sitting around from another project.” (read more) 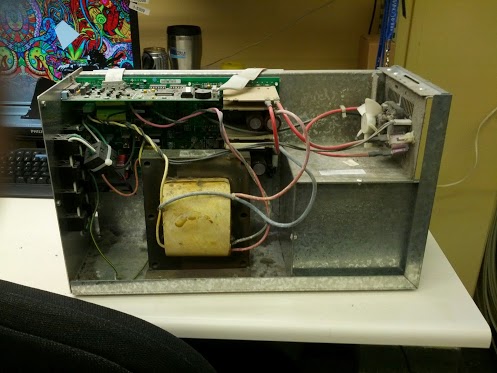 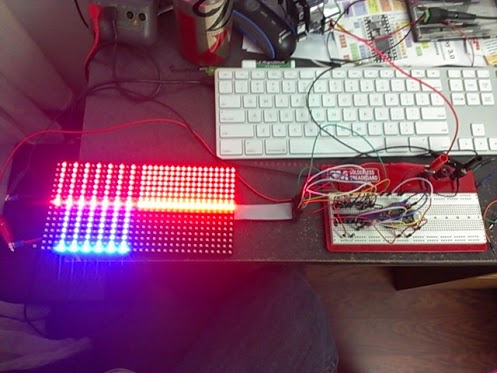 Shared by Aaron Eiche: “Our first steps in getting our 32×16 led panel working with a Teensy 3.” (read more) 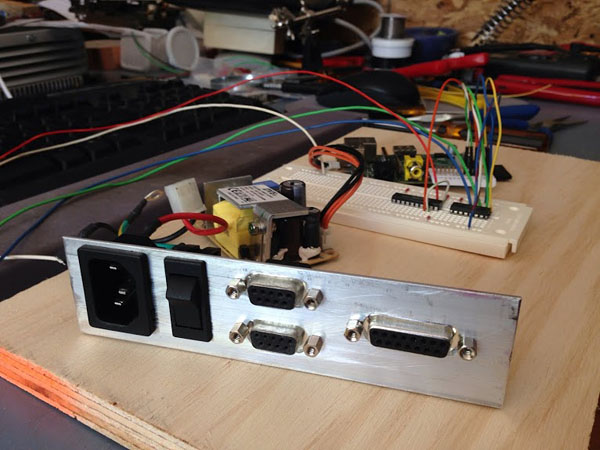 Chris Osborn milled up a back plate for a RasPi case: “The d-sub connectors are for whatever random I/O that I might need. I already plan to use the 15-pin connector as a floppy disk drive interface for my Atari 800 and Commodore 64.The power supply was scavenged from a dead Netgear switch. It outputs 5V at 3A, more than enough for the Pi and any accessories.” (read more)

Jeremy Cook shared what he believes may be the smallest “Useless Machine” so far! “Posted a video of this little useless machine a few days ago. Here’s the full build log with code and details of what I used.” (read more) 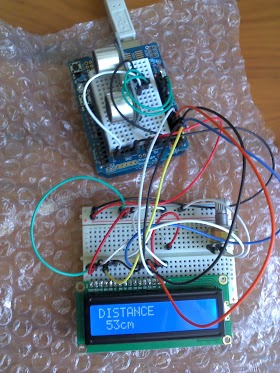 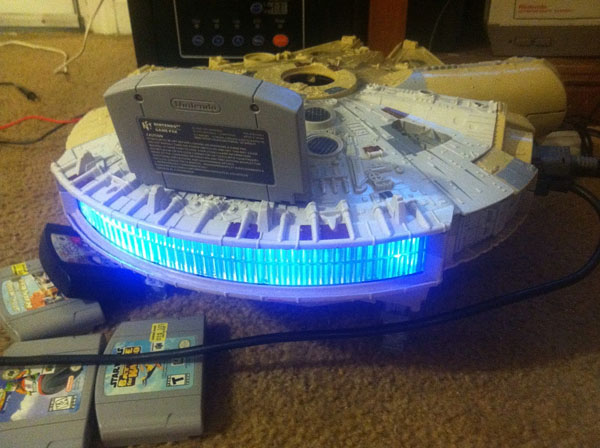 Baka Chan shared his awesome Millennium Falcon N64 Mod: “I finally decided where to put all of the switches, plugs and ports on the falcon, so I started hacking. More specifically I started melting. I used my rotary tool to cut out the controller ports in the last post and that seemed to make a god-awful mess and was extremely hard to control precisely It was well enough on the controller port because it is shadowed well enough to not see the half-stick of hot glue holding it together… (it is very sturdy though lol).” (read more) 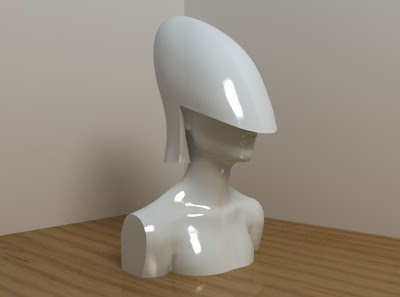 Rafiq Anas shared tips for modifying a 3D model before sending it to be produced by a service that charges by volume of material: “As you can see here the model is hollowed this helps a lot to reduce the price of printing since the printer will be using less materials,the wall thickness should be respected carefully depending on the material that will be used,it is very important so the model won’t break in the process or printing and also in the process of finishing.” (read more) 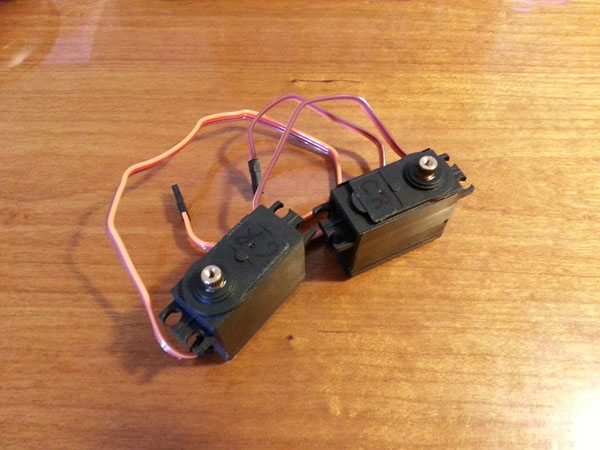 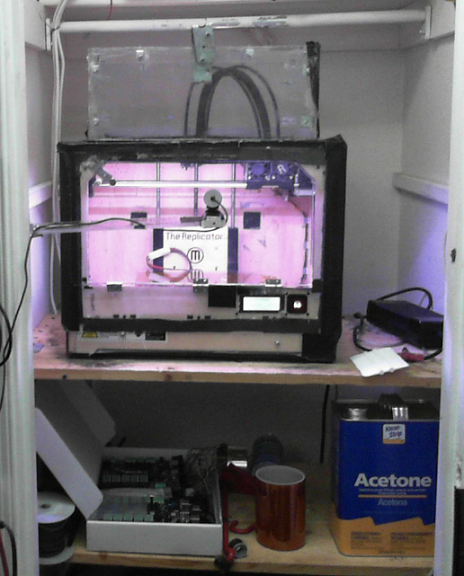 Kris Kortright shared his MakerBot Replicator 1 setup before Show & Tell: “I have my Replicator 1 dual in a closet in my room across from me, with a custom acrylic top, front door and side panels I made.”(read more)

Projects from the #3DThursday Blog Series 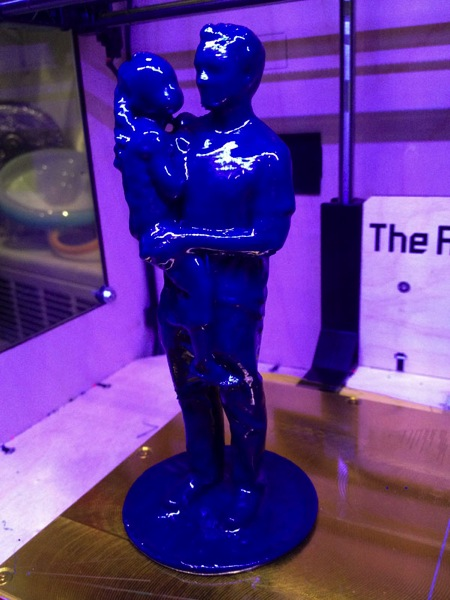 3D artist Fred Kahl shared photos from Westport Maker Faire. He has been doing a great job optimizing how he scans and prints massive numbers of people in one sequence, and even built his own custom lazy-susan “people mover” platform (shared on Thingiverse) to allow him to easily grab full body scans, and all using affordable tools and software! Check out these scans from the event from The Great Fredini’s Cabinet of Curiosities. (read more) 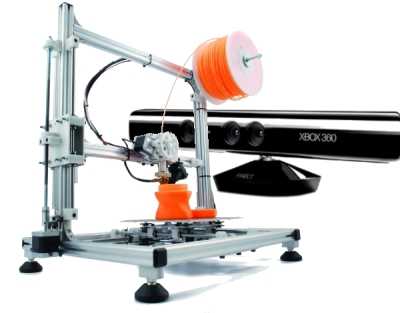 Boris Landoni shared an introduction to Kinect for 3D Scannings: “Now, we have a cheap dedicated hardware that is ready to provide a 3D representation of what’s in front of it. Microsoft Kinect, hacked thanks to some tenacious developers, is now emerging as a simple and effective tool to acquire three-dimensional models. From desktop size stuff up to furniture or the whole person, Kinect can be miraculous on its own.” (read more) 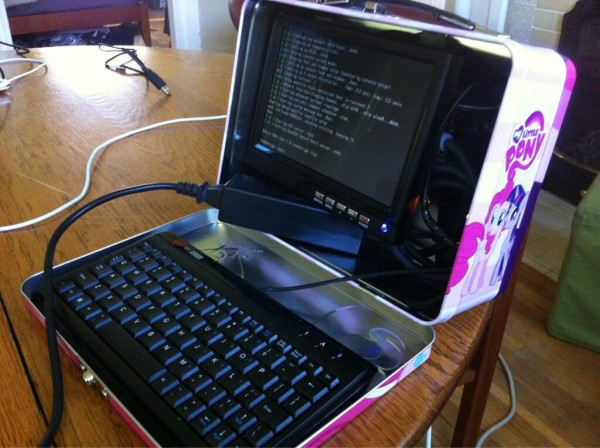 Jed Parsons made a RasPi My Little Pony Lunchbox: “I think this is going to work.” Awesome! (read more) 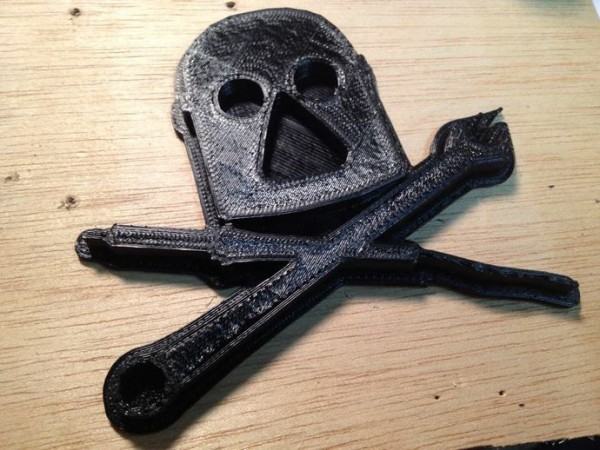 An update from the Milwaukee Makerspace traveling mascot RasPi hackerspace project! “I’ve figured out how to connect the GPS unit, and configure the software on the Pi to read the data.” (read more)

And last, but certainly not least, this awesome wall-box Pi mod: “I used a Raspberry Pi to re-invent my old 1960’s wall box as a controller for my wireless home media system (SONOS). It looks wonderful in my kitchen with its chrome and warm lights. Everyone loves dropping in a quarter, seeing the credits light up, and hearing it clunk and whirr as it selects a song. The RPi is housed inside the wall box and runs a program that polls the GPIO for pulses from the wallbox. It decodes the pulses into a song selection and using UPnP protocols over my home wi-fi, adds the song to the SONOS queue.”
(read more)

Comments Off on Community Corner: This Week in Adafruit’s Community!