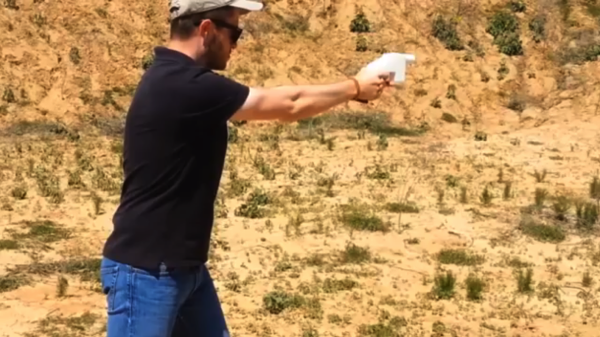 While the match-up of “3D printing” + “weapons” continues to be a disproportionate hot topic in the media in the wake of the video of Defense Distributed’s Cody Wilson firing the first “entirely” (mostly) 3D printed handgun model, Michael Weinberg of Public Knowledge has been making efforts to educate policy makers and advocate for intelligent debate and consideration for the highly vulnerable developing field of desktop 3D printing. (Though skip below Weinberg’s update below for the “steps back” portion of this update, pretty much the precise thing Weinberg and others are attempting to avoid.)

Over on the Public Knowledge blog, Weinberg shared this update on parsing the latest developments in the federal debate over 3D printing and weapons:

Friday may well go down as a turning point in the debate around 3D printed guns, and 3D printing policy in general.  Two important sides seemed to step away from confrontation and instead focus on what is important to them.  Defense Distributed included metal parts in their otherwise fully 3D printed handgun.  And Rep. Steve Israel used Defense Distributed’s announcement to raise concerns about undetectable firearms, not 3D printing.  Both should be praised for these decisions.

But first, some background

Conversations about firearms have been bubbling around the edges of 3D printing for some time now.  Things really started heating up when an organization called Defense Distributed announced its intention to help design a fully 3D printed firearm.  This raised some policy concerns (some novel, some not) about home manufacture of firearms.

Perhaps the highest profile critic of Defense Distributed was Rep. Steve Israel.  Although his primary concern was with undetectable firearms, much of his framing seemed to single out one way to make undetectable firearms – 3D printing.  This 3D printing focus came to a head when Rep. Israel sent out a “Dear Colleague” letter to other Members of Congress raising fears about 3D printed firearms.

What Defense Distributed did

On Friday, Forbes reported that Defense Distributed released photos of what it claims to be a fully 3D printed handgun.  But the handgun had an important feature – it included six ounces of steel, thus making it a detectable firearm.

This was a savvy decision on Defense Distributed’s part.  The organization has a substantial list of intriguing goals but making a gun that can be smuggled into an airport does not seem to be one of them.  By including metal in the design, Defense Distributed stepped away from what may have been a distracting side conversation. This should allow it to focus on the things it really cares about without unnecessarily reaching into other policy areas.

What Rep. Israel did

We were quite critical of Rep. Israel’s previous Dear Colleague letter.  As we wrote then, the letter seemed to muddle his concerns and be overly-focused on one way to make undetectable firearms, not on undetectable firearms themselves.  Friday’s announcement could have been an opportunity to return to that argument.

None of this will be the last word

While these are both encouraging steps, they certainly do not represent the end of the line.  Including metal in a gun design does not mean that it cannot be modified to be undetectable.  And removing 3D printing references from a Dear Colleague letter does not mean that no Member of Congress will ever unnecessarily vilify 3D printing.

But both sides appear to have shifted their focus back to what they really care about.  This type of evolution is positive for policy conversations surrounding 3D printing.  Hopefully they are signs of positive things to come.  And you can rest assured that we here at Public Knowledge are working to make sure that this momentum keeps moving in the right direction.

Hopefully, the efforts of Weinberg and others will help stave off the confusing, polarizing, and ultimately both superficial and destructive public outcries by lawmakers and citizen action groups that have in the past hindered other innovator technologies such as video games and online music.

However, as may have been inevitable from the outset — and what many had felt to be an explicit goal by Defense Distributed’s Cody Wilson as a provocateur — the first wave of rather vague attempts by lawmakers to stop the “3D printed weapon” problem runs the risk of impacting the development of desktop 3D printing itself in unhelpful ways. Details of California Senator Leland Yee’s declaration that he will propose laws to band the technology used to create 3D printed weapons here in this article from CNET :

With gun control battles raging among federal and state legislators, it was inevitable that the issue of 3D-printed handguns would come up, especially with such a gun now available.

California Senator Leland Yee announced Tuesday his plan to propose a law that would ban the technology used to create 3D-printed guns.

“While I am as impressed as anyone with 3-D printing technology and I believe it has amazing possibilities, we must ensure that it is not used for the wrong purpose with potentially deadly consequences,” Yee said in a statement. “I plan to introduce legislation that will ensure public safety and stop the manufacturing of guns that are invisible to metal detectors and that can be easily made without a background check.”

Comments Off on 3D Printing and Guns Debate Takes A Few Steps Forward, A Few Steps Back #3dthursday