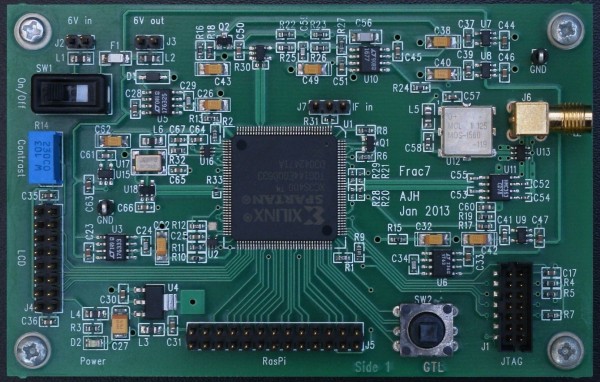 I was motivated to design this receiver after reading the work [1] of Matjaž Vidmar, S53MV, who developed a GPS receiver from scratch, using mainly discrete components, over 20 years ago. His use of DSP following a hard-limiting IF and 1-bit ADC interested me. The receiver described here works on the same principle. Its 1-bit ADC is the 6-pin IC near the pin headers, an LVDS-output comparator. Hidden under noise but not obliterated in the bi-level quantised mush that emerges are signals from every satellite in view.

All GPS satellites transmit on the same frequency, 1575.42 MHz, using direct sequence spread spectrum (DSSS). The L1 carrier is spread over a 2 MHz bandwidth and its strength at the Earth’s surface is -130 dBm. Thermal noise power in the same bandwidth is -111 dBm, so a GPS signal at the receiving antenna is ~ 20 dB below the noise floor. That any of the signals present, superimposed one on another and buried in noise, are recoverable after bi-level quantisation seems counter-intuitive!

GPS relies on the correlation properties of pseudo-random sequences called Gold Codes to separate signals from noise and each other. Every satellite transmits a unique sequence. All uncorrelated signals are noise, including those of other satellites and hard-limiter quantisation errors. Mixing with the same code in the correct phase de-spreads the wanted signal and further spreads everything else. Narrow-band filtering then removes wideband noise without affecting the (once again narrow) wanted signal. Hard-limiting (1-bit ADC) degrades SNR by less than 3 dB, a price worth paying to avoid hardware AGC.