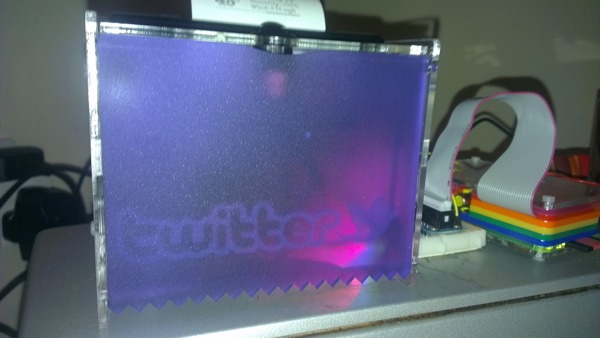 Another great job by Sir Ben of Phenoptix Towers. He built me the original case in clear acrylic with the old style Phenoptix logo on the front access and cover panel whilst I was setting my Adafruit Mini Thermal Printer up with my Arduino Ethernet to run as a Electronic Fortune Cookie machine. It was pretty cool for a few months till everyone had played with it enough and we had gone through 3x 75ft rolls of paper printing random fortunes from a server.

I have recently been inspired Adafruit once again who brought some new life to its lovely little £40 Thermal receipt printer and created the Python Libs and files to run the Printer from the much more versatile and powerful RasPi which obviously has a far more appeal and range of uses due to being able to connect to any website, server, or database and run far more complex programs due to the almost unlimited space available compared to the measly 32KB of room the ‘Duino allowed and having it all being able to be coded in Python which is far easier to change around and cut and paste pieces.

Anyway with a bit of tweaking of their code for running a standard search f the Twitter API every 30 seconds and printing any matches to the criteria you give it, I went a little further with the API and created some custom searches and set it up so an RGB LED would be lit if a match occurred and then it prints the tweet. I have also just about got it working so depending on which search criteria it matches it displays a different color (Nothing fancy, Just Red, Green and Blue to keep it simple). It also responds to a secondary button push which also lights the RGB LED, this button is as well as the standard as set out in the Adafruit program which gives you Time & Temp printout for a tap and Safe Power Down of the Pi if you hold down for 2 seconds. Now in addition on a further momentary switch the Printer will print the last tweet from each of the 3 criteria I have set it up for depending on how long you hold the button down, each step is 2 seconds and the LED will light each of its 3 main colours for every 2 seconds its held down which match the search criteria result light colour… So hold for 2 secs and the LED Goes Red and Prints out last tweet from criteria #1 (To @RaW_Gaming) once it gets to 4 secs the LED will switch to Blue and print the 2nd criteria last tweet (From @xxxxxx) and then at 6 secs it goes to Green and prints criteria #3 which currently is (Farnell and Camera) – was keeping eye on tweets for the word as soon as Farnell put the RasPi cameras on sale, which worked well as I got the first tweet saying they were up on the Farnell site and immediately went there and pre-ordered one of the first new RasPi cameras in exactly the same way as I managed to get one of the first UK BeagleBone Blacks the week before by having the app run matches for “Farnell and BeagleBone”. After 8 Seconds the Main program kicks in and starts a safe shut down and tapping the other button still prints Weather and Time (Local).

Its a pretty cool setup!

Anyway it was starting to look a mess and I needed to hide alot of fly leads so Ben kindly once again hit the laser and cut me a new front in semi transparent Purple Acrylic (which I bought myself and had shipped to Phenptix for a project I eventually scrapped months ago and has been sitting up there with no use for ages) etched with the Twitter Logo so that its not visible and just a plain purple front when there are no notifier lights lit but the logo lights ups when the LED does with each colour and and looks pretty sweet diffused through the frosted purple!. Also replaced the two side panels with same Purple to hide the mass of wiring bundled inside the case.