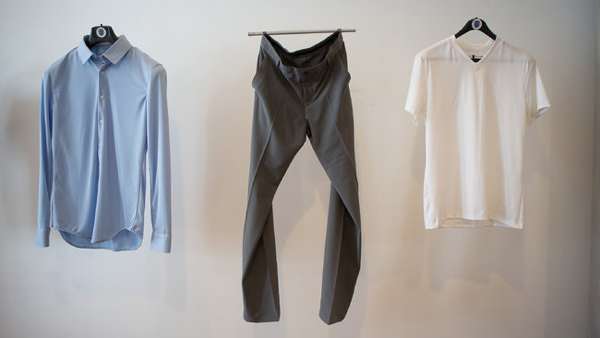 Ministry of Supply high-tech office apparel: “Rolling Up Their Sleeves, as a Team” @ NYTimes.com:

As a 14-year-old Boy Scout who went on backpacking trips in western Massachusetts, Gihan Amarasiriwardena couldn’t find a fleece jacket that would protect him from the wind. His solution was to make his own wind-blocking coat from scratch, using plastic garbage bags, spray-on adhesive and fleece. Enlarge This Image Bryce Vickmark for The New York Times

Samples of bicycle-friendly apparel from Ministry of Supply. The company uses an aerospace design process to trace how the body’s skin moves.

Six years later, while riding his bike around the campus of the Massachusetts Institute of Technology as an engineering student, he realized he needed a dress shirt that could withstand the rigors of bicycle commuting. This time, he teamed up with a classmate and set out to make that missing item in the clothing market.

But they weren’t the only ones at M.I.T. to identify such a problem. Two students at its Sloan School of Management soon got together to develop their own version of work-appropriate clothing made with practical fabrics.

One was Kit Hickey, a former investment banker who had been frustrated that her Brooks Brothers suits were so stiff compared with her rock-climbing togs. The other was Aman Advani, now 28, who in his previous life as a management consultant had begun cutting the tubes from his dress socks and stitching them to the feet of his sports socks to build better footwear for his rigorous travel schedule.

The two groups, potential competitors, met each other at M.I.T.’s entrepreneur center in 2011. But instead of seeing each other as rivals, they decided to work together. “We were like, ‘Oh my God, this is crazy.’ I can’t believe we found each other,” Ms. Hickey, 28, says of the meeting.

“It was promising to know that there might actually be a market for this,” adds Mr. Amarasiriwardena, 24. By this time, he and his classmate Kevin Rustagi had started Ministry of Supply, a clothing business based in Boston that specializes in high-tech office apparel. Soon after the meeting, Ms. Hickey and Mr. Advani joined the company.