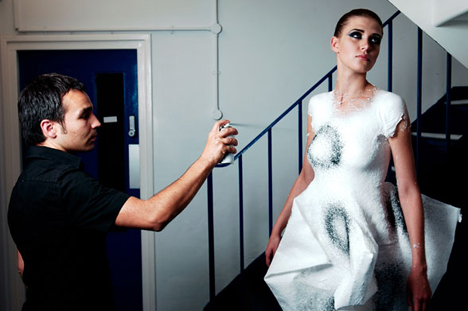 Don’t get us wrong, Fabrican is amazing. But it is not new, and serves as a reminder of just how long it can take to bring a good idea to market, and how dogged inventors need to be. Manel Torres first conceived of Fabrican way back in 1995, when he was an RCA student studying fashion design, after watching a friend get sprayed with Silly String. Torres began to collaborate with chemical engineers, and by 2000 he’d filed a patent and set up R&D facilities at Imperial College London.

Three years later Torres formed Fabrican Ltd., and another three years went by before the blogosphere picked up on the stuff. Here in 2013, seven years later, there are still no announcements for commercialization; the “News” section of Fabrican’s website saw its last update in 2010.

Has Torres given up? Doesn’t look like it, as he’s delivered several Fabrican-based TED Talks as recently as last year. We can only speculate as to what’s preventing the appearance of Fabrican on store shelves, which is what we’d really like to see; while Torres is proposing industrial solutions targeted at the medical, automotive and fashion design industries, we think selling the stuff in cans and letting you guys figure out what to do with it would be a good way to go.