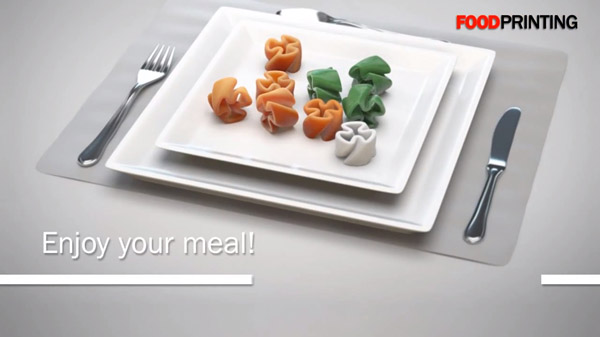 The audacious plan to end hunger with 3-D printed food, from Quartz:

Anjan Contractor’s 3D food printer might evoke visions of the “replicator” popularized in Star Trek, from which Captain Picard was constantly interrupting himself to order tea. And indeed Contractor’s company, Systems & Materials Research Corporation, just got a six month, $125,000 grant from NASA to create a prototype of his universal food synthesizer.

But Contractor, a mechanical engineer with a background in 3D printing, envisions a much more mundane—and ultimately more important—use for the technology. He sees a day when every kitchen has a 3D printer, and the earth’s 12 billion people feed themselves customized, nutritionally-appropriate meals synthesized one layer at a time, from cartridges of powder and oils they buy at the corner grocery store. Contractor’s vision would mean the end of food waste, because the powder his system will use is shelf-stable for up to 30 years, so that each cartridge, whether it contains sugars, complex carbohydrates, protein or some other basic building block, would be fully exhausted before being returned to the store.

Ubiquitous food synthesizers would also create new ways of producing the basic calories on which we all rely. Since a powder is a powder, the inputs could be anything that contain the right organic molecules. We already know that eating meat is environmentally unsustainable, so why not get all our protein from insects?

If eating something spat out by the same kind of 3D printers that are currently being used to make everything from jet engine parts to fine art doesn’t sound too appetizing, that’s only because you can currently afford the good stuff, says Contractor. That might not be the case once the world’s population reaches its peak size, probably sometime near the end of this century.

“I think, and many economists think, that current food systems can’t supply 12 billion people sufficiently,” says Contractor. “So we eventually have to change our perception of what we see as food.”

If Contractor’s utopian-dystopian vision of the future of food ever comes to pass, it will be an argument for why space research isn’t a complete waste of money. His initial grant from NASA, under its Small Business Innovation Research program, is for a system that can print food for astronauts on very long space missions. For example, all the way to Mars.

“Long distance space travel requires 15-plus years of shelf life,” says Contractor. “The way we are working on it is, all the carbs, proteins and macro and micro nutrients are in powder form. We take moisture out, and in that form it will last maybe 30 years.”

Pizza is an obvious candidate for 3D printing because it can be printed in distinct layers, so it only requires the print head to extrude one substance at a time. Contractor’s “pizza printer” is still at the conceptual stage, and he will begin building it within two weeks. It works by first “printing” a layer of dough, which is baked at the same time it’s printed, by a heated plate at the bottom of the printer. Then it lays down a tomato base, “which is also stored in a powdered form, and then mixed with water and oil,” says Contractor.

Finally, the pizza is topped with the delicious-sounding “protein layer,” which could come from any source, including animals, milk or plants.

The prototype for Contractor’s pizza printer (captured in a video, above) which helped him earn a grant from NASA, was a simple chocolate printer. It’s not much to look at, nor is it the first of its kind, but at least it’s a proof of concept. 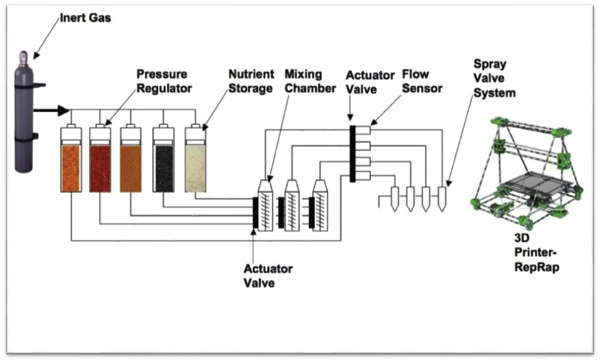