Kickstarter and the view from the trenches of TechShop 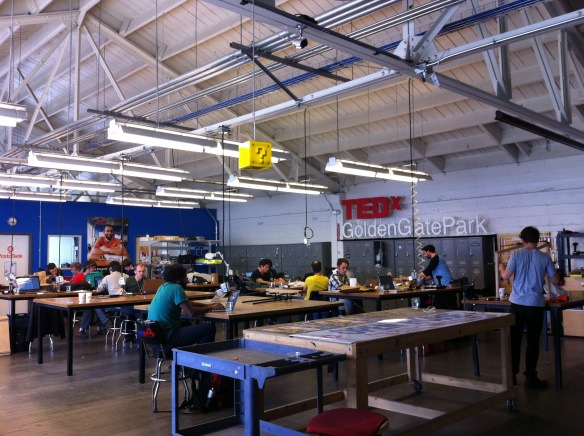 Kickstarter and the view from the trenches of TechShop @ PandoDaily.

Dehmlow says Kickstarter has even transformed the TechShop. He started to notice the difference about a year ago, when the scope of the projects came a lot bigger. The workshop’s clientele falls into three evenly divided categories: people from existing companies experimenting with new prototypes, artists and craftsmen, and entrepreneurs. He said that since the breakthrough of Kickstarter, the entrepreneurial set that frequents the place have become a lot more aggressive about the business ambitions of their projects. He can’t give a percentage of how many members have or are planning Kickstarter campaigns because it’s all anecdotal and the company doesn’t keep records of that sort of thing. But he says it’s a common occurrence.

The makeshift launch ceremonies at TechShop almost sound like the CEO of a newly public company ringing the opening bell at a stock exchange on IPO day. And while the scale is nowhere near the same, there are some parallels to the daunting challenges ahead for companies in both situations. For a newly public company, a new type of work emerges with your freshly issued ticker symbol. In the same way, when a Kickstarter campaign launches and – God willing – closes successfully, the entrepreneurs begin to fathom the mountain of work ahead after the dopamine wears off.

“They come in the next day and realize what they have to do,” Dehmlow says. They go from having to build a few units to building hundreds or thousands, and TechShop is no longer the place for them. But Dehmlow says he tries to make the transition as easy as possible. He gives those members advice on where they can buy tools to mass-produce, gives them tips on cheap places to rent out space, and shares contacts in TechShop’s network.

He hopes that over time, TechShop can formalize that process. He says he doesn’t want to charge for it, but wants it to work in an organized manner. “We want to help them cross that chasm,” he says.