Enrico Dini of D-Shape: The Man Who Prints Houses #3dthursday

While I have no details about the state of the documentary connected with the above trailer, I wanted to share it because I have been somewhat fascinated with Dini since seeing him speak at Inside 3D Printing NYC (a photo is below, though they seem to have stripped out the NYC Speakers list from the site). His stories of the struggles has faced time and time again on his mission to solve the problem of how to 3D printing dwelling-scale buildings were actually my favorite of that entire conference — and the limits of his success in achieving his goals despite some clever thinking and lots of elbow grease is an important reminder of how difficult 3D printing is when you scale it up. I stumbled on this documentary trailer hunting for more of his stories. Check out the background write up from The Man Who Prints Houses, via Boing-Boing:

UPDATE: Special treat below — the EvD episode from yesterday!

Enrico Dini is a robotics expert. He is also a self-styled ‘stone alchemist’: able to mimic the process of how rock forms under the seabed. Combining these two skills, he has developed a groundbreaking new construction technique based on the principle of 3D-printing. Enrico’s dream is to one day see houses of any shape and size printed robotically in solid stone – but as we all know, dreams can come at a price…

3D-printing is a method that physically realizes digital designs layer by layer using a fluid substance that can be hardened by lasers or other binding agents. To date, it’s been used for small-scale manufacturing and as architectural maquettes. Enrico, however, has far grander plans.

With exclusive access into all aspects of his life, this film follows Enrico as he strives to make his dream of large-scale 3D-printing a reality. From his ambitious business ideas, to financial problems and struggles in his family life, the film tells the story of a visionary inventor shackled by his life’s work.

Having built his printer – the world’s largest – from scratch, there’s no shortage of work offers for this highly-skilled and imaginative engineer. Throughout the course of the film, we see Enrico embark on an array of innovative projects: constructing the tallest printed sculpture in existence, working with Foster + Partners and the European Space Agency on a program to colonize the moon, solidifying a sand dune in the desert, and printing the closest thing to an actual house: a small Italian dwelling known as
a trullo.

The long-term nature of these projects and the current financial climate take their toll on Enrico and his team of workers, as contracts fail to be honored and the infant technology stutters. Travel back to 2008 and it’s a different story, as Enrico describes how he was staring a €50m investment in the face.
Just as he’s about to sell up and move to London, the stock market crashes… he must rebuild his business all over again.

Divorced from his wife and estranged from his young son who he only sees every other weekend, Enrico has enough reason to complete his opus vitae and ensure decisions in the past weren’t made in vain. Present-day footage contrasts with old home movies to show his life as it is now, and what it could have been. Because of this toing and froing from past to present, The Man Who Prints Houses drifts from a straight-up science
documentary to an intimate portrait of a tortured genius who’s literally laying the foundations of a mind-boggling and truly life-changing technological revolution. 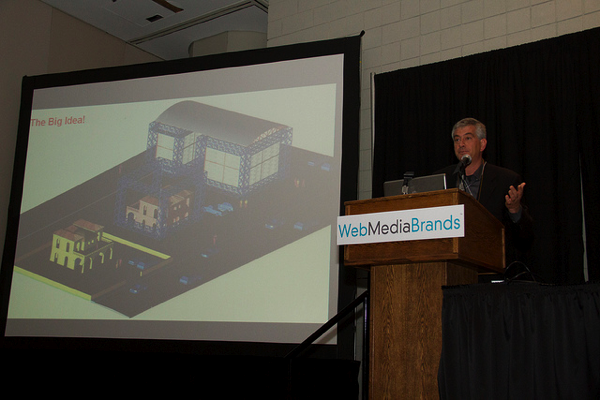