Check out this short video from Engadget that features the trio of “laser cowboys” who are performing the 3D scanning in the Smithsonian Digitization office. This video counters some of the wild rumors that were spread in the press last year around this time and gives some great details about their process and aims. Via Cubify.

“We’re not scanning every object in the collection,” Adam Metallo tells me, offering up the information almost as soon as we set foot in the Smithsonian’s Digitization office. It’s an important piece of information he wants to make sure I have, right off the bat. It seems that, when the story of the department’s 3D-scanning plans first hit the wire, a number of organizations blew the scope of the project out of proportion a bit. And while the team’s project is certainly ambitious, it’s not, you know, crazy. It’s the work of a three-person team, still in its nascent stages, attempting to prove the value of new technologies to a 167-year-old museum affectionately known as “the nation’s attic.”

In the fall of 2011, Metallo and fellow Smithsonian 3D scanner Vince Rossi (a duo the institute has lovingly deemed its “laser cowboys”) unpacked their equipment in Chile’s Atacama Desert. “They were widening the Pan-American Highway, and in doing so, they uncovered about 40 complete whale specimens,” Rossi explains. “But it might take decades for them to remove the fossils from the rock, so we were able to capture this snapshot of what that looked like in 3D.” The tool of choice for the expedition was a laser arm scanner, which utilizes a process the duo compares to painting an object, moving back and forth across its surface as the device records the relative position of its axes. 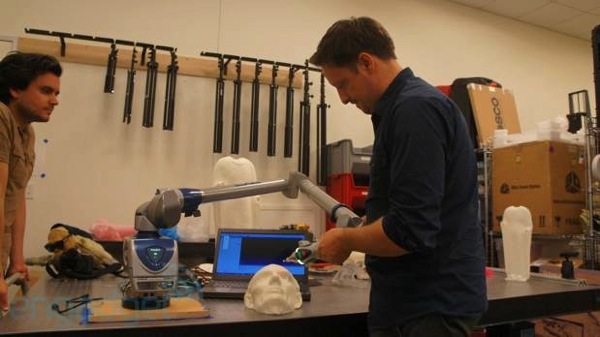