There is a new radical RepRap 3D printer in town called Simpson. George Gaylord Simpson came up with the idea of Quantum Evolution, the theory that evolution can happen in abrupt burst. The namesake was chosen for the printer to signify its quick divergence from other existing designs. Nicholas Seward started barely a month ago with the goal to build a 3D printer with the following requirement:

During the month, the design has gone from a idea through at least 7 major revisions and has produced 3 prototypes. The open style of the RepRap Project has allowed for some crucial collaboration. Thousands of people have viewed Simpson’s development forum. Many have posted ideas, suggestions, and encouragement. The project would not exist in its current state without the open source community.

Johann Rocholl’s Rostock and Quentin Harley’s Morgan provided much initial inspiration. After many different initial design iterations a novel delta architecture was selected. A typical delta robot has all the arms connect above the work envelope. Simpson has all the arms connect below the work envelope to keep the center of gravity low and to remove the need for a support structure. Additionally, Simpson drives the elbow joint of each arm instead of the shoulder joints like most delta robots. This allowed for a drastic reduction in the inverse kinematic equations.

Ilian Bonev, a professor in the field of robotics at École de Technologie Supérieure said the design was “innovative” and “truly original.”

The printer can be made from off the shelf components for less than $400USD. It has a large print volume on the order of 10 liters! Currently, Simpson is still in the prototype stage but there will be a public release of all the files on 6/15/2013. Check out the development forum for more info. 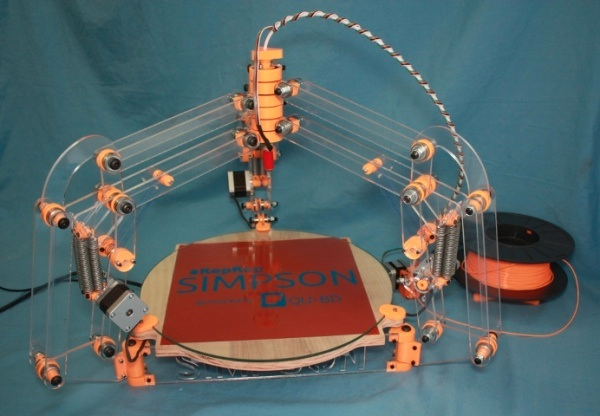