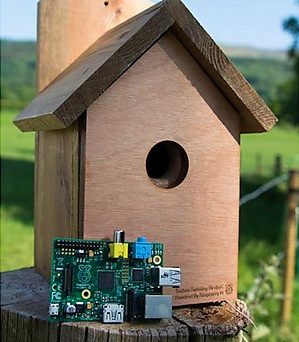 One place you might not have considered placing your RasPi: check out Raspberry Pi in a Bird Box.

From the BBC Springwatch Blog:

If you’re anything like me, you’ve wondered what happens in your garden while you’re not watching. I wanted to know when birds are most active – are they busier in the evening or early morning? Thanks to the latest technology, now with a couple of taps of my smartphone I can monitor the bird activity in my garden from anywhere in the world.

Traditionally, recording bird activity was a manual process and required many hours of constant nest watching. Springwatch has an army of story developers watching cameras and noting activity round the clock. I didn’t fancy hours watching a bird box so wondered if I could get a computer to do it for me.

Last February, a new tiny computer, the size of a credit card sized went on sale for £30. The quirkily named ‘Raspberry Pi’ computer was created to get more people interested in computers and I’d become aware of it through my work with the School of Computer Science at The University of Manchester. The Raspberry Pi computer’s diminutive dimensions and low cost meant it could be placed where computers had never been placed before – for me, that mean in a nest box.

The tiny Raspberry Pi computer records when birds enter and leave the nest box, together with information on the weather. This information is sent over the Internet so activity can be monitored from anywhere.

We’ve been monitoring a blue tit nest here at Ynys-Hir with the computer. The latest data is shown below. The orange bars show the number of visits per 1.3 hours, the red line shows temperature and the green line shows wind speed. I’m hoping to post more graphs later….

Read about Dr. Andrew Robinson’s analysis of the data collected so far here. 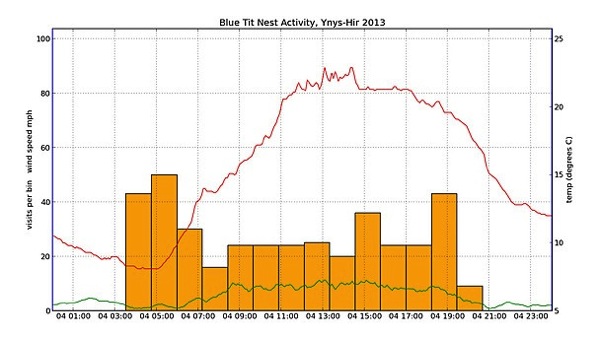