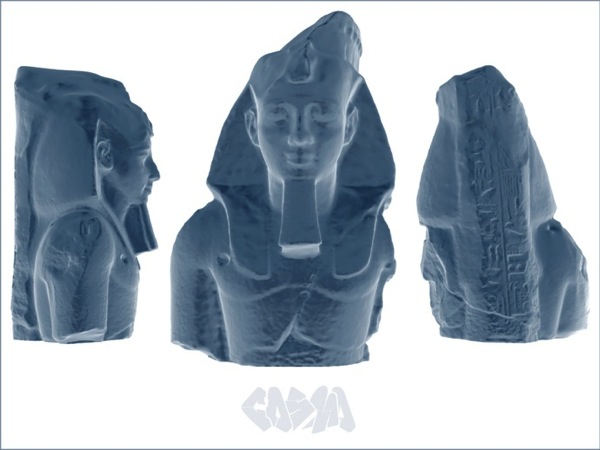 As a demonstration for what he hopes to accomplish with his project Through A Scanner, Skulpturhalle, artist Cosmo Wenman has started making good on his promise to scan, cleanup, and share notable masterworks of art and sculpture with world early — his crowdfunding project is just getting started, and he is already sharing artwork for free on Thingiverse!

This seems to me be a very classy move in a climate where it can be tempting to see crowdfunding sites as stores and the rewards for supporting the efforts as purchased goods — his goal is to give all away for free, just get some help doing so! Check out the Colossal bust of Ramesses II, the ‘Younger Memnon’ to see how he plans to scan and document those important works of art:

I scanned this piece at the British Museum in October, 2012.

From the British Museum’s web entry:

Weighing 7.25 tons, this fragment of his statue was cut from a single block of two-coloured granite. He is shown wearing the nemes head-dress surmounted by a cobra diadem.

The sculptor has used a slight variation of normal conventions to relate his work to the viewer, angling the eyes down slightly, so that the statue relates more to those looking at it.

It was retrieved from the mortuary temple of Ramesses at Thebes (the ‘Ramesseum’) by Giovanni Belzoni in 1816. Belzoni wrote a fascinating account of his struggle to remove it, both literally, given its colossal size, and politically. The hole on the right of the torso is said to have been made by members of Napoleon’s expedition to Egypt at the end of the eighteenth century, in an unsuccessful attempt to remove the statue.

The imminent arrival of the head in England in 1818 inspired the poet Percy Bysshe Shelley to write Ozymandias:

I met a traveller from an antique land

Who said: Two vast and trunkless legs of stone

Stand in the desart. Near them, on the sand,

Half sunk, a shattered visage lies, whose frown,

And wrinkled lip, and sneer of cold command,

Tell that its sculptor well those passions read

Which yet survive, stamped on these lifeless things,

The hand that mocked them and the heart that fed:

And on the pedestal these words appear:

“My name is Ozymandias, king of kings:

Look on my works, ye Mighty, and despair!”

Nothing beside remains. Round the decay

Of that colossal wreck, boundless and bare

The lone and level sands stretch far away.

After its arrival in the British Museum the ‘Younger Memnon’ was perhaps the first piece of Egyptian sculpture to be recognized as a work of art by connoisseurs, who traditionally judged things by the standards of ancient Greek art. 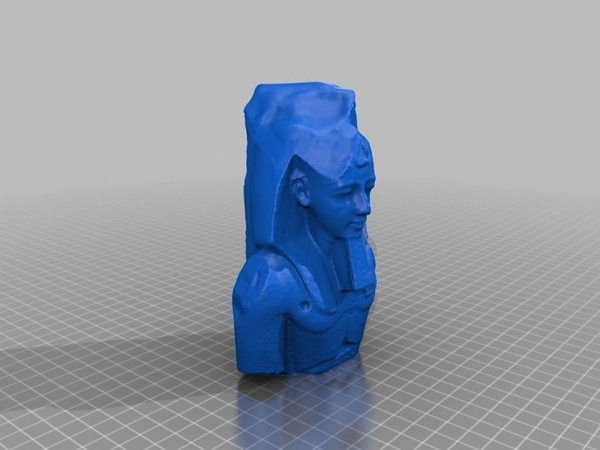