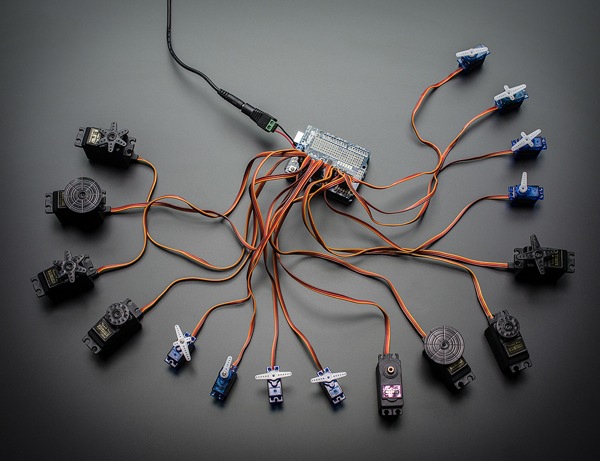 NEW PRODUCT – Adafruit 16-Channel 12-bit PWM/Servo Shield – I2C interface. You want to make a cool Arduino robot, maybe a hexapod walker, or maybe just a piece of art with a lot of moving parts. Or maybe you want to drive a lot of LEDs with precise PWM output. Then you realize that the Arduino has only a few PWM outputs, and maybe those outputs are conflicting with another shield! What now? You could give up OR you could just get our handy PWM and Servo driver shield. It’s just like our popular PWM/Servo Breakout but now Arduino-ready and works with any Arduino that uses shields: Uno, Leo, Mega, ADK, its all good. 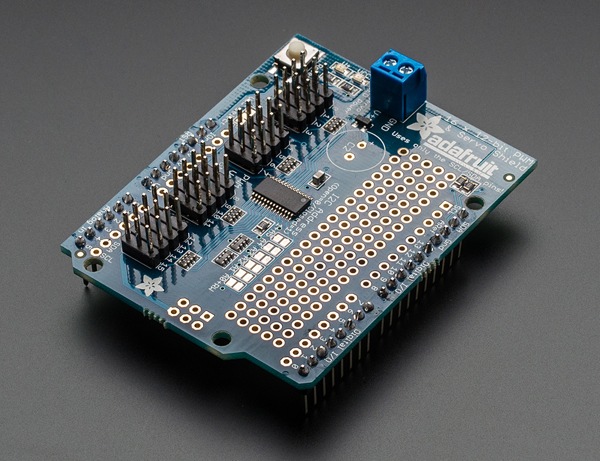 When we saw this chip, we quickly realized what an excellent add-on this would be. Using only two I2C pins, control 16 free-running PWM outputs! You can even stack up 62 shields to control up to 992 PWM outputs (which we would really like to see since it would be glorious and like 4 feet tall) Because I2C is a shared bus you can also connect other I2C devices and sensors to the SCL/SDA pins as long as their addresses don’t conflict (this shield has address 0x40) 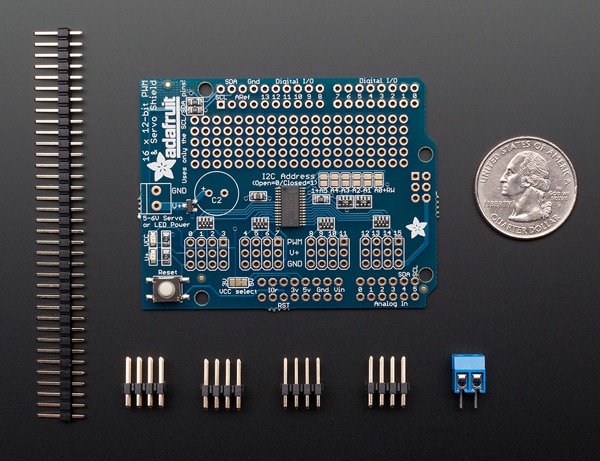 This product comes with a fully tested and assembled shield as well as 4 pieces of 3×4 male straight header (for servo/LED plugs), a 2-pin terminal block (for power) and a stick of 0.1″ header so you can plug into an Arduino. A little light soldering will be required to assemble and customize the board by attaching the desired headers but it is a 15 minute task that even a beginner can do. If you want to use right-angle 3×4 headers, we also carry a 4 pack in the shop. Servos and Arduino not included – but we do sell tons of different servos in the shop so pick up a few while you’re here!

Check out our tutorial with Arduino and you can get our documented Arduino library which has both PWM and Servo examples from github!

Filed under: arduino, robotics — by adafruit