Real Life Tron on an Apple IIgs – Stay on Target 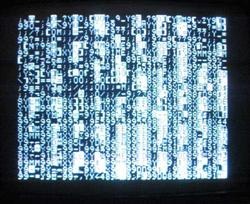 Real Life Tron on an Apple IIgs – Stay on Target via Waxy.

One of my favorite movies as a kid was Tron, the early 1980’s film about a computer programmer who gets “digitized” and sucked into a computer world inhabited by personified computer programs.  In the film, the protagonist joins a group of resistant programs in an effort to take down the oppressive Master Control Program (MCP), a rogue piece of software which had evolved, acquired a thirst for power, and was attempting to take over the Pentagon’s computer systems.

In one of the most exciting scenes in the film, the hero programs race in light cycles, which were two-wheeled motorcycle-like vehicles that left walls in their wake.  One of the protagonists forced an enemy cycle to crash into the arena’s wall, leaving a gaping hole.  The heroes dispatched their opponents and escaped through the hole to freedom – the first step on their way to take down the MCP.

When I watched that movie, I had no idea that I would unwittingly recreate the Tron world years later, rogue programs and all, with an Apple IIgs computer.
Here’s how it happened: When I first learned to program, I decided to create a version of the Tron light cycles game.  My friend Marco Busse and I programmed it on an Apple IIgs using ORCA/Pascal and 65816 assembly language.  During play, the screen background was solid black with a white border, with one color line representing each player.  We displayed the game score in a horizontal strip at the bottom of the screen.  It wasn’t the most graphically advanced program, but it was simple and fun.