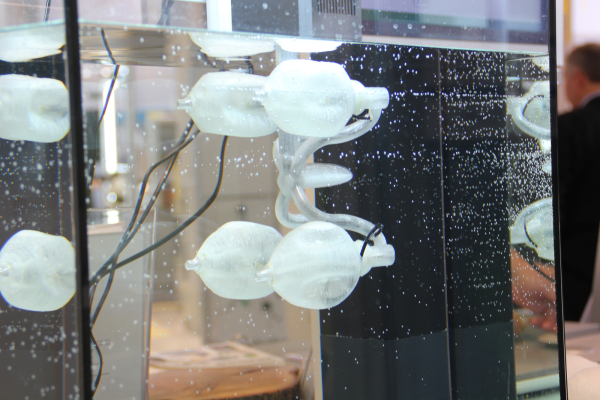 Octopus inspired underwater propulsion made with 3D printer at Fraunhofer Institute for Manufacturing Engineering and Automation IPA. Via 3ders.org.

Octopods, which are also known as octopuses or squid, are considered to be the most intelligent invertebrates. In fact, they have been referred to as the “sages of the sea”. They are capable of learning; they can open tin cans, and can even tell patterns apart. They are also clever when it comes to protecting themselves from their enemies. While they generally move along the ocean floor with their eight arms, they flee by swimming head-first, in line with the principles of propulsion. When the mollusk does this, water is taken into its mantle, which is then closed by contracting sphincter muscles. The water is then squirted back out at a high pressure through a funnel. The resulting propulsion pushes the octopus forward in the opposite direction. By changing the position of the funnel, the octopus can precisely steer its direction of travel. For researchers at the Fraunhofer Institute for Manufacturing Engineering and Automation IPA, this intelligent propulsion principle served as a role model for the development of an underwater propulsion system. “Squids use this type of movement mainly if they are trying to flee suddenly and quickly. The system is simple, but effective. When they use it, the octopods can speed up considerably over short distances,” says Andreas Fischer, an engineer at IPA in Stuttgart. “We have integrated this propulsion principle into our underwater actuators: four elastomer balls with mechanical inner workings create propulsion by pumping water.”

Water is sucked into each actuator or elastomer ball through an opening ; a recirculation valve prevents reflux. A hydraulic piston contracts the integrated cable structure like a muscle. In this way, it pushes the water out of the 20 x 6 cm ball. In turn, a motor pump moves the hydraulic piston. “Our underwater actuator is well-suited for maneuvering small boats. It can also be used as a floating aid for water sport devices such as jet skis, surf boards, or scooters that pull divers into deep water. In contrast to ship propellers, it is quiet, and fish cannot get caught in it,” the researcher says in explaining the benefits of the system, which has just successfully past initial laboratory tests.

The best part: the experts can produce the system in a single step with a 3D printer. In order to produce its complex geometry amorphously with soft plastic, the researchers opted for the fused deposition modeling generative production process, or FDM for short. With this approach, the plastics to be processed are heated and liquefied in an extrusion head , and are transformed into a thin filament in the pressure nozzle. This filament is then applied in layers, from bottom to top, to produce a complex 3D component. Fischer and his team used thermoplastics such as polyurethane because of their flexibility. The final product of this process is an underwater propulsion system that can stand extreme levels of pressure without breaking. Even in situations of very high stress, it always returns to its original shape….