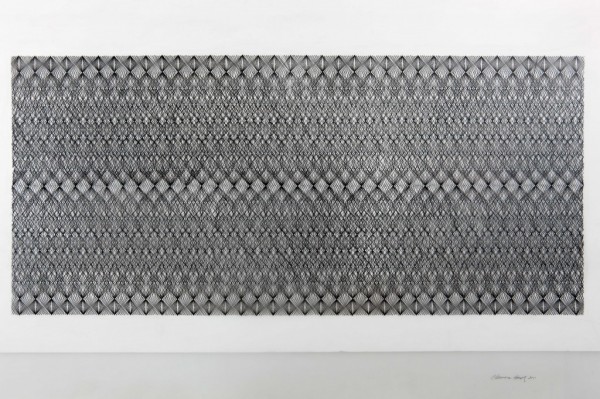 In the early 1960s Channa Horwitz (b. 1932 Los Angeles) made a discovery that was crucial for her artwork: by limiting her visual language to simple logical systems and sequences, she could open herself to innumerable possibilities. Her embrace of a rules-based conceptualism gave her an enormous sense of freedom, and she has been making geometric abstract drawings and paintings employing predetermined systems ever since. 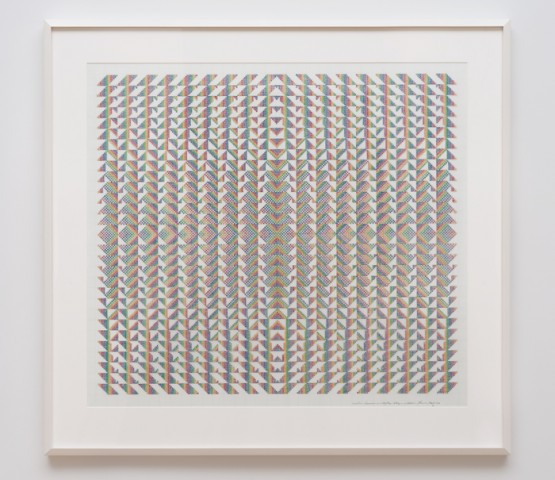 “Variations and Inversions on Rhythm (Matrix in four parts II)”, 1990

Seeking to capture time and motion—she dubbed her series of drawings initiated in the 1960s Sonakinatography to reflect her commitment to sona (sound) and kina (movement)—Horwitz lays down her drawings on graph paper, the lines and squares rendered in deep black or the colors of the spectrum to create oftentimes deliriously intricate patterns. The logic of her renderings is quickly usurped by a sense of awe about the great mysteries of life and the inevitable entwining of chance and structure that characterizes daily existence. For all their conceptual rigor, her remarkable drawings undulate with great rhythm and intensity. The selection for Made in L.A. includes examples from Horowitz’s series Sonakinatography, Canon, and Matrix, demonstrating the range of her remarkable output over the past five decades.

Comments Off on Works by Channa Horwitz