Check out this very cool blink project Miria Grunick made for her 2 year old nephew — a blinky button box that will continue to grow and expand for him as he becomes more curious!

This was a gift for my two year old nephew. Since he is a fan of lights and buttons, I wanted to make something blinky for him to enjoy. The concept was simple: make a clear box with buttons that would change colors and patterns based on which buttons were pressed.

First, I had to find a clear acrylic box large enough for some LEDs, switches, buttons and a microcontroller. I found this great polycarbonate box from Hammond Manufacturing that seemed to be the right size. Next, I needed to find some buttons that could take a beating. Fortunately, Adafruit sells some translucent arcade buttons in bright colors. The lighting was a no-brainer as I am a huge fan of Adafruit’s addressable LED strips. I also found a glowy on/off switch for the power. Somewhere along the way, I thought it would be a cool idea to add a rotary knob so that he could select different blinking patterns.

The next step was to assemble the pieces and wire everything together. The polycarbonate box was harder to work with than I had hoped. The polycarbonate would discolor if I used the laser cutter, so I found myself drilling all of the holes with a rotary tool. I then added the buttons, knob and on/off switch… 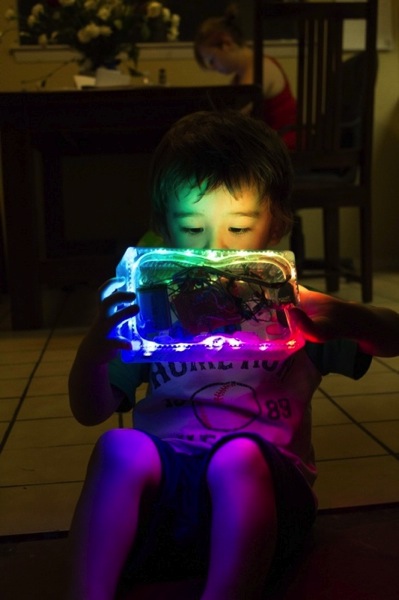 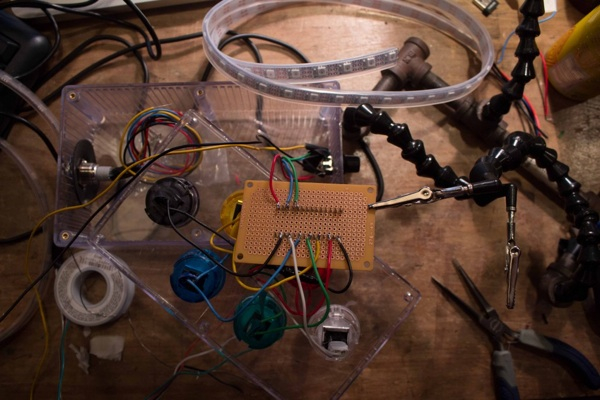 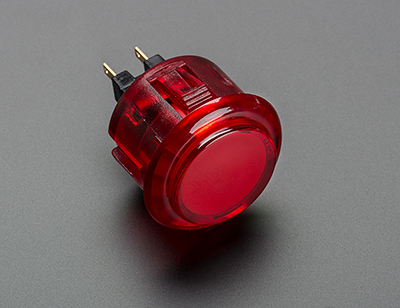 Arcade Button – 30mm Translucent Red: A button is a button, and a switch is a switch, but these translucent arcade buttons are in a class of their own. They’re the same size as common arcade controls (often referred to as 30mm diameter) but have some nice things going for them that justify the extra dollar. First, they look fantastic, all 6 colors have a crystal translucent glossy look. Although they do not have LEDs built in, we’re confident that sticking a diffused LED into the body would make it light up very nicely. They are also shorter than cheap arcade controls, and snap into place, so you only need 1.5″ of depth (1.25″ if you bend the contacts over). The button action is smooth, without a strong click, yet you can definitely feel when the button is pressed. A tiny micro-switch is pre-installed, with gold plated contacts. (read more) 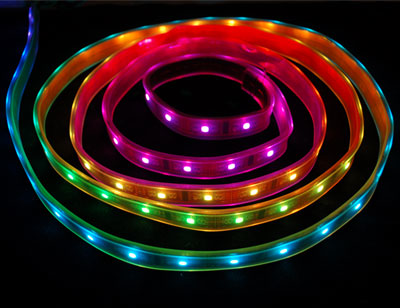 Digital RGB LED Weatherproof Strip 32 LED – (1m): These LED strips are fun and glowy. There are 32 RGB LEDs per meter, and you can control each LED individually! Yes, that’s right, this is the digitally-addressable type of LED strip. You can set the color of each LED’s red, green and blue component with 7-bit PWM precision (so 21-bit color per pixel). The LEDs are controlled by shift-registers that are chained up down the strip so you can shorten or lengthen the strip. Only 2 digital output pins are required to send data down. The PWM is built into each chip so once you set the color you can stop talking to the strip and it will continue to PWM all the LEDs for you. (read more)

Filed under: leds-lcds — by Matt