What does a simple wooden box and a woman wearing a body wrap have in common?  Only Google, a ‘Hill Climbing Algorithm’ and Shapeways 3D Printer can show us.  Venus of Google is an experimental work by artist Matthew Plummer-Fernandez exploring emerging technology and culture:

The Venus of Google was ‘found’ via a Google search-by-image, googling a photograph taken of an object I had been handed over in a game of exquisite corpse. The Google search returned visually similar results, one of these being an image of a woman modeling a body-wrap garment. I then used a similar algorithmic image-comparison technique to drive the automated design of a 3D printable object. The ‘Hill-Climbing’ algorithm starts with a plain box shape and tries thousands of random transformations and comparisons between the shape and the image, eventually mutating towards a form resembling the found image in both shape and colour. I’m interested in this early era of artificial intelligence, computer vision and algorithmic artefacts, exemplifying the paradox of technology being both advanced and primitive at the same time. The Long Tail Multiplier series investigates the potential use of algorithms to create virtually infinite cultural artefacts, inspired by the stories of these algorithmic books and t-shirts.

The Long Tail Multiplier system is based on a Hill Climbing Algorithm. The 3D Mesh render and distortion is done with Processing and the Hemesh library. The image comparison is managed with a Python script calling a command-line tool called ImageMagick. 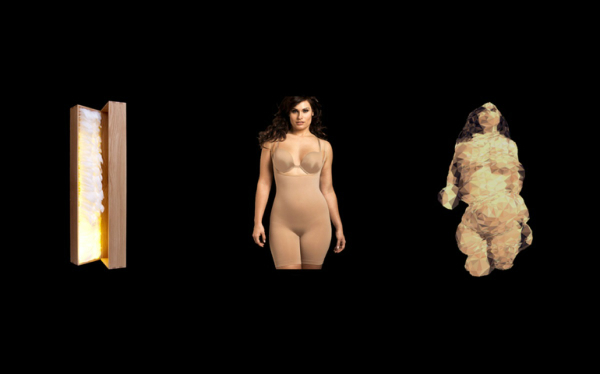