Check out this great talk from talented young maker Easton LaChappelle, who has been developing his 3D printed robotic prosthetic hand project for several years now. Hear about the stages he went through conceiving and developing the project, from age 14 to 17!

When he was 14, he came up with an idea to built a robotic hand out of Lego bricks, fishing wire and servos. It was a challenge because he knew nothing about electronics or programming. But that idea triggered him to learn himself electronics and modeling software. The first version of robotic hands won him the 3rd place at the Colorado state science fair in 2011.

The second version of the hand grew into an arm. Using an open source hand from Thingiverse and help of a Makerbot 3D printer, LaChappelle was able to upgrade his animatronic gripper to a functional robotic arm with more 3D printed parts.

At the Colorado fair he met a little girl who was born without a right arm and wore an $80,000 prosthetic limb, and he was convinced he could do better.

Now 17, LaChappelle has completed the third version of his robotic hand and the costs is only around $250. His ‘Arduino Robotic Arm’ is up to shoulder and has the same functionality as a human arm. It connects to a brainwave headset that read the user’s brainwaves and get a focus rate, so when the user focuses on an object the hand will close and grasp an object. And the arm also has a feedback system using a force sensor and a vibrating motor to give the user a sense of touch…. 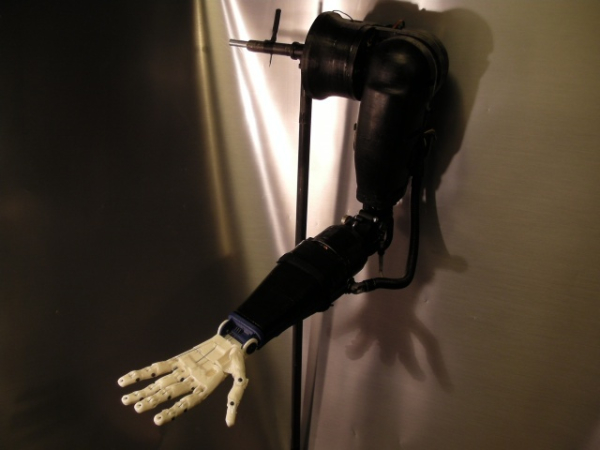