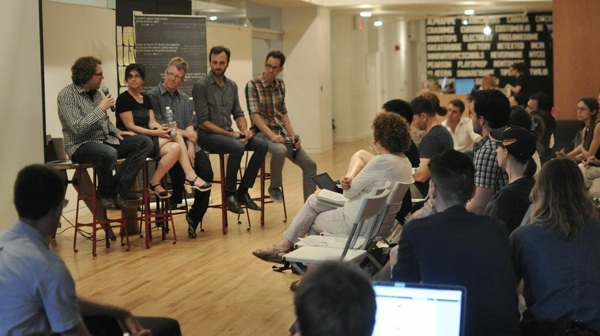 Here is one of the “things” from a recent Quartz panel discussion held at General Assembly in New York City about taking 3D printers “beyond the hype”: or as they put it “Three things you need to understand about 3D printing to talk about it intelligently.” I (Griffin) was one of the participants and enjoyed the chance to chat on this topic with Joergen Geerds, Duann Scott of Shapeways, Liz Arum of The MakerBot Foundation, and Quartz reporter Christopher Mims.

3D printing isn’t good for a lot of things

Easier interfaces are key to making 3D printing mainstream, the panel agreed, but material limitations are also a concern. “Right now,” Scott said, “You can only use one material at a time. Most things around you are made from multiple materials. This microphone has a crap ton of stuff inside of it.” Not being able to print electronics and their casings in one go, the panelists said, was a major drawback.

There are plenty of things (like firearms) that you could probably make with a 3D printer, but shouldn’t —- and not just because of possible legal issues. The mechanisms of a gun aren’t easily produced by a 3D printer, and will perform sub-optimally. This concept, Scott said, extends to other products as well: Just because we can print it doesn’t mean we ever will.

And 3D printing won’t be changing the way all manufacturing works, the panelists agreed. “It’s not a place for manufacturing, it’s a place for prototyping,” Arum said, “And it has certain uses, but it won’t transform everything.”

Griffin concluded that most of the overhype of 3D printing comes from a misunderstanding of what exactly a 3D printer is. “There’s a lot of conflation, with people saying we’re 3D printing organs and key fobs,” Griffin said. “But they’re talking about different machines and different goals. The machines are evolving separately.” The fact that one expensive, highly specialized machine can weave cars from carbon fiber filament, he said, doesn’t mean that this is something all 3D printers will be enlisted to do….