Volvo Gave Away the Most Important Design They Ever Patented 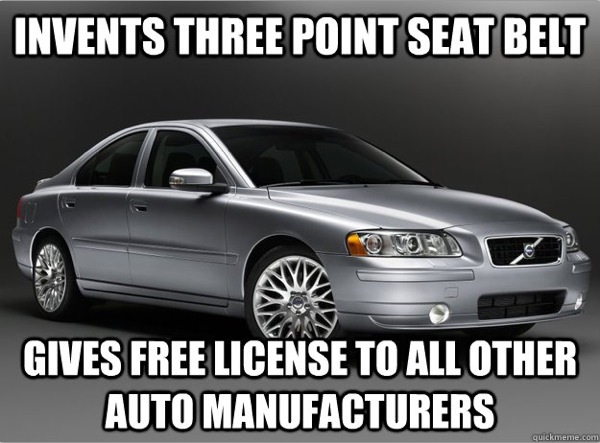 Volvo Gave Away the Most Important Design They Ever Patented.

In 1958, people rarely buckled up. While race car drivers and fighter pilots wore harnesses, the seat belts available in cars simply banded across one’s lap. In crashes, they frequently did more harm than good. The sudden pressure put on the abdomen during a crash caused internal injuries.

At the time, Volvo was already pushing its brand as a safety conscious automaker. Its CEO, whose relative had recently died in a car crash, decided to hire Nils Bohlin, a man who had previously designed ejector seats for fighter jets, as chief safety engineer (a new position).

Bohlin turned his attention to seat belts. He had worked with four point harnesses in fighter jets, but doubted that consumers would use such a bulky contraption. “It was just a matter of finding a solution that was simple, effective and could be put on conveniently with one hand,” he later toldthe New York Times.

In 1959, Volvo delivered its first car that used Bohlin’s answer, a three point seat belt that can be seen in the above image and every car sold today. Volvo received a patent for the design in 1962, but rather than hoard it, they gave it to the world. Volvo shared the design, allowed any carmaker to use it, and sent Bohlin on a world tour to encourage its use.