Announcing the Contestants in the “Get Closer” Challenge! @element14

Thank you to everyone to entered the Get Closer Challenge with element14! We had 121 entrants, and it was hard to narrow it down to these eight. There were so many great project ideas, we hope you’ll follow along with us and get inspired and make some projects of your own– we have a wealth of FLORA tutorials to get you started!. We look forward to sharing updates on each of the following contestants’ projects throughout the competition. 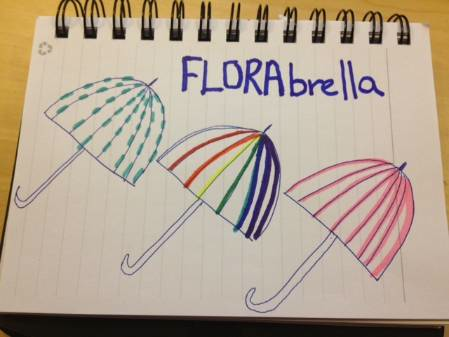 Leslie Birch in Pennsylvania (United States) has an LED umbrella project in mind to brighten your day:

No one likes rainy days—that’s why the FLORAbrella will brighten my day with a simulated rain shower light pattern that converts to a rainbow inspired light show. I’ll be using a clear domed umbrella to show off the Neopixels and either the GPS or color sensors to add more fun. The GPS can have my umbrella do its rainbow light show when I’m near home, while the color sensor would allow me to match outfits. 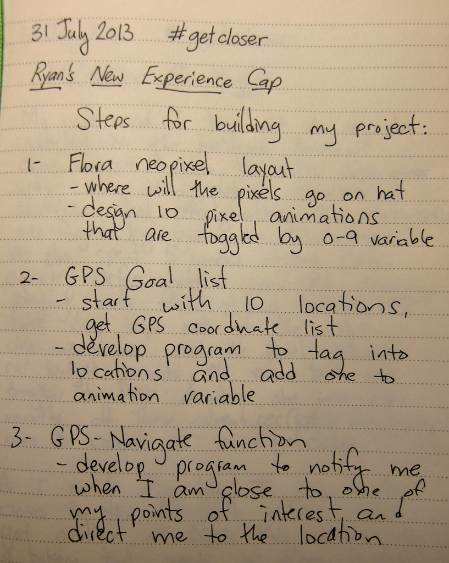 Ryan Cain in New York (United States) is working on a GPS project:

My wife and I have a list of cool places in NY we want to hit before we leave. An embedded Flora baseball cap with a GPS, compass, and LEDS will guide us to the locations and track our progress. The more goals we meet—the more elaborate the animation of colors on the neo pixels. On the underside of the brim, pixels would provide the user with notifications and directions.

Chris Carter in Minnesota (United States) has an family costume project in mind using the FLORA light sensor, accelerometer, and a microphone.

Color Sensor: The baby’s color triggers LEDs to form a heart on Ellison’s costume to light up. Woven Conductive Fabric: Ellison can press the tips of her gloves together completing a circuit. This causes her suit to throb and trigger a light burst from her hands. Light Sensor: Chris’ light sensor picks up Ellison’s throbing light and mimics it. His hands then generate a similar light burst. Accelerometer: The baby’s lights are divided into front, back, top and bottom so when he is droppped, the light floats to the top and when he is pulled up, the light drops to the bottom as if the light had some kind of physical weight property. Extra: Sound Sensor: The intensity of the baby’s voice controls the light intensity of his outfit.

Katie Dumont in the United Kingdom has a rollerblading project in mind:

If I had this kit I would integrate it on my skating jackets sleeve I might even sew on a new jacket) with 8 ‘compass point’ LEDs surrounding a central RGB LED. This central coloured LED would change colour based on how far away from home I got, giving an easy to see nondistracting representation of how far I’d gone and when it was time to head home. The compass points would illuminate the current direction that home is, giving me a quick and easy to follow guide to which roads to take home (i.e. take the next road in the direction of the currently illuminated LED) and would ensure that I didn’t end up skating in the wrong direction!

Catherine Jones in the United Kingdom has an audience polling project in mind.

Wouldn’t it be interesting if visitors to a museum could display physically whether the agreed or disagreed with a question. The device that I am proposing is a piece of wearable technology, that can display a response to a question or a poll. Or a recommendation of a exhibit or gallery. It will display the response in a abstract but recognisable way. Maybe a colour or a pattern that is closely associated with the exhibit or gallery. This would help people to select what they should visit within the museum. It will bring people together by starting conversations and debates between people who they can see have similar or opposing views to their own. 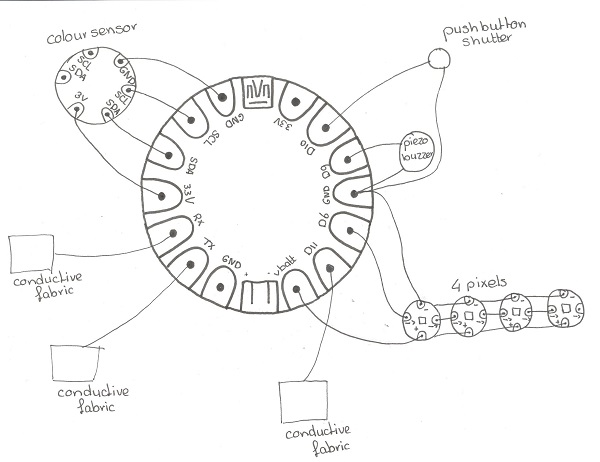 Linda Kaspers in The Netherlands is making a color sensor toy:

Proposal: I’d like to make a toy for small children. The toy will be made out of fabric and shaped like a camera. The game will work as following: The camera is held in front of a colorfull object, for example a green apple. When the ‘shutter’ is pushed, the two bright LEDs are used as a flashlight to make sure the color sensor can identify the right color. That exact color is then transfered to the NeoPixel in the viewfinder on the back of the camera. There are three more Pixels on the back. One of these will have the same color as the viewfinderLED (and the apple), the other two will have different colors. By touching the conductive fabric underneath the right color, you’ll hear a nice sound to indicate you choose the right color. If you happen to choose the wrong one, you’ll hear a buzzer indicating you should try again. I’m hoping it’ll keep my neighbor’s kids busy while they’re in my house!

Alex May in California (United States) has a GPS glove project in mind.

Proposal: Wake-On-Shake Navigation Glove A fitted glove with an array of 8 Adafruit Neopixels (on the palm) used to represent a compass that does not point north, but at a settable GPS coordinate. An accelerometer will be monitored in a passive mode to provide wake-on-shake functionality (to limit power used on the led array) and correct for palm-up vs. palm-down viewing. My intention is to encase the (final iteration) electronics in a semi-sheer fabric shell to create a sleeker appearance while either inactive (smooth, functional garment) or active (pleasant and clear indication). Some experimentation may be needed to ensure good GPS reception, passive mode shake-monitoring, and light diffusion/transmission through various fabrics. Expansions of this test could include the other input devices (Flora light sensor, capacitive touch with the conductive fabric, etc.) or software/interaction improvements (setting new GPS coordinates, fade-in/out effects, indication of proximity to destination, etc.).

First, I live within 90 minutes of about 20 world class roller coasters. Using the accelerometer, I want to log the ride on as many as possible. While it’s logging, I plan to have a real time display using LED strips showing how thrilling the ride is. Second, I’d like to use the FLORA to add a gaming element to geocaching by making an app to let us turn the device into a wearable homing device for a weekend event. Players compete to find locations using clues and navigational tips from their FLORA. Third, I want to build a wearable health monitoring device using sensors to monitor respiration, heartbeat and level of physical activity.

Comments Off on Announcing the Contestants in the “Get Closer” Challenge! @element14