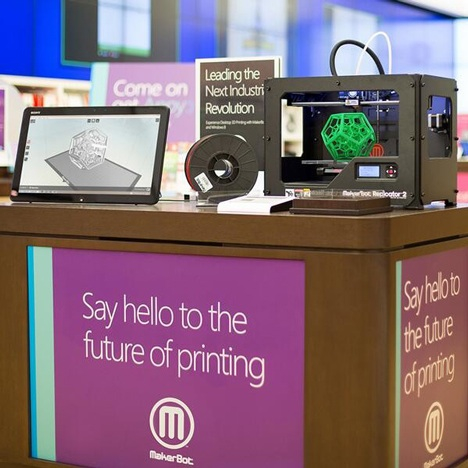 In addition to the in-progress merger with 3D printing industry leader Stratasys, the once-scrappy startup underdog MakerBot Industries has also been courting some powerful friends in Redmond. Check out the announcement from yesterday: Microsoft to sell MakerBot 3D printers in USA stores. Via Dezeen.

News: computer and electronics retailer Microsoft has become the first US retailer to sell MakerBot’s desktop 3D printers on the shop floor for customers to take home on the same day.

Microsoft has partnered with 3D printing manufacturer MakerBot to offer customers the chance to buy their own MakerBot Replicator 2 Desktop 3D Printer from 18 retail stores across the USA. This move makes Microsoft the first retailer to sell MakerBot’s desktop printers outside of the company’s own New York store. Microsoft store customers will also be able to buy the PLA bioplastic material used by the printer and in-store 3D printing demonstrations will be available.

At the 3D Printshow in London last year, MakerBot CEO Bre Pettis told Dezeen editor-in-chief Marcus Fairs that “cheap 3D printers mean manufacturing can again take place at home as it did before the industrial revolution.”