Community Corner: Custom RasPi Asteroids Control Surface, How to Make Your LEDs Brighter, Defending Your Personal Space With Style (and Flora), and Other Tasty Crumbs From This Week in Adafruit’s Community 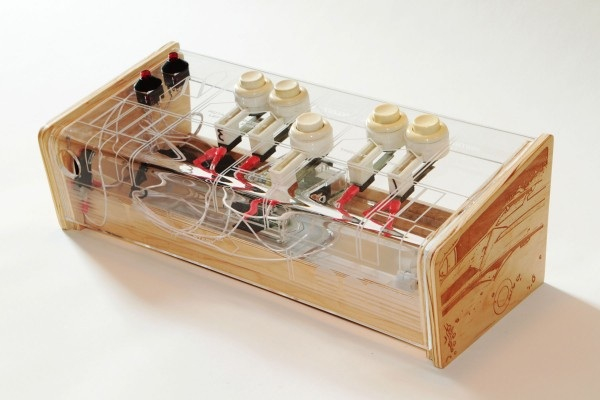 After spending time collecting panels and buttons from an original Asteroids cabinet, Tim Bartlett, AtariAsteroids.net curator of all things Asteroids, optioned to design an entirely new clear top Asteroids control interface (for running it on a Raspberry Pi!) that captures the functionality, feel, and spirit of the original. (read more)

There are people making amazing things around the world, are you one of them? Join the 57,884 strong! And check out scores of projects they shared this week after the jump! 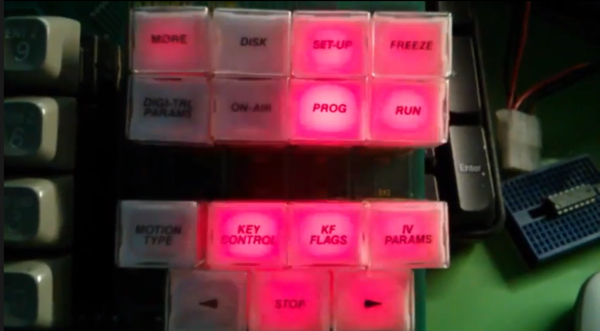 Steve Anderson shared: “Back to work on my broadcast control keyboard retrofit hack thing. After a few weeks off for paid work, I’ve been up in my attic getting the first batch of lit keys operational. I’m doing it in two phases – output (LEDs) then input (keys) and have been using 74HC164 shift registers to get each block of 8 working. With a shared data line I only need 7 pins for 42 LEDs. Here’s the first 16 going. Pleased to see them work!” (read more)

Nicholas Seward shares an update on the RepRap Simpson project: “It is 2 sided, simple, strong, fast, and accurate!” (read more)

Erin RobotGrrl shared: “Here is Botbait, the tentacle mechanism robot that I showed on Show-And-Tell a few weeks ago. Here’s its webpage where you can read more about it, see photos, dl the oshw 3d pieces, watch a more in-depth video, etc.” (read more) 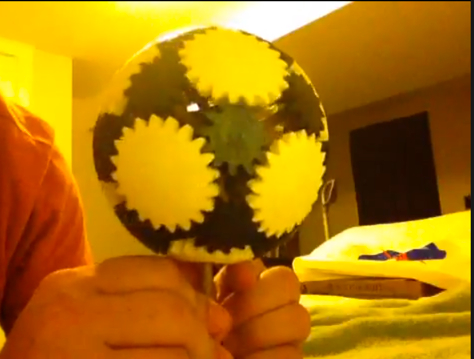 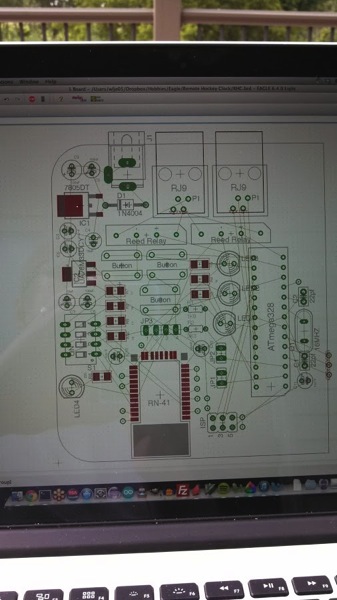 Justin Eltoft shared: “Laying out my second board in EAGLE for a Bluetooth controller I will control from an android phone.” (read more) 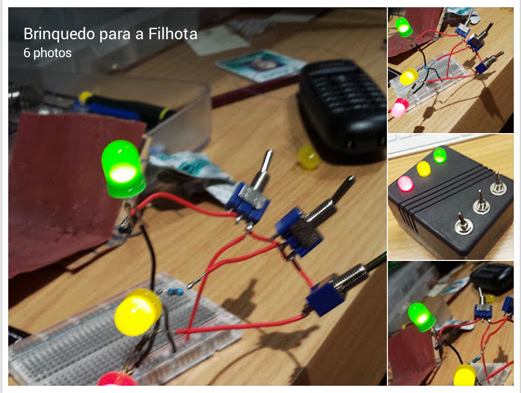 Manoel Lemos shared: “{A Toy For my Future Maker Girl} A very dumb circuit in a black box with LEDs and switches. Almost an hour to finish everything and lots of fun to see my daughter (she is only 2 and says she’ll be a rocket engineer when grown up) playing with it. 😉 #makerkids” (read more)

Matt Heilman shared a video: “How to improve the light output of your LED String Light.” (read more)

Lennart Lundstrom shared an Arduino-controlled Jukebox project in the Adafruit Forums: “I modified my 1961 jukebox somewhat. What do you think?” (read more) 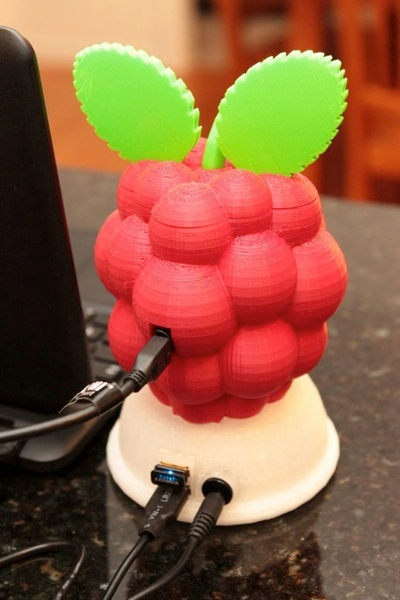 Rick Winscot shared with us his Very Berry Pi-Case 3000: “Time to unleash your inner-geek and make a tangy very berry Raspberry Pi case – say that ten times fast! …If you’re interested in setting up your very berry dock as a laptop as pictured – you should checkout the amazing tutorial at Adafruit. There are a couple special cables and an HDMI adapter you’ll need.” (read more)

Grissini shared his Personal Space Defender, built with FLORA: “PT talked about this idea more than a year ago on Ask an Engineer. Adafruit_Support_Bill helped get my code where it needed to be. This project wouldn’t have been possible without the awesome people here(@Adafruit). As always, Thanks for being so AWESOME!!!! This item uses Flora and a Maxbotix distance sensor to help keep people out of my invisible person space bubble. People encounter a bright visible clue of Flora_Pixels when they invade my bubble. Bill, part of the Adafruit support team, helped me get the pixels to avoid false positives when I am drinking champagne at these fancy black tie events. Saving the blistering, eye shattering LED’s for the rude people who invade my space. I chose to go ahead a build this now with the advent of Adafruit’s and Element14′s “Get Closer” contest. I don’t want anyone to get closer. This is my anti-entry!” (read more)

User IronJungle shared a SpiroGraph 3D Laser Project in the Adafruit Forums: “I have done several projects, but wanted to play with the Arduino. Instead of just getting an LED to “Hello World”, I decided to lump a few basic, commonly used uC features into one easy project. Results were good. I learned many of the Arduino basics and was left with an interesting project. Maybe it can help someone else get Arduino motivated….” (read more)

David L. shared his neat project, the Whisper Jar: “I just wanted to let you know that I LOVE the Adafruit wave shield. It’s a fantastic piece of hardware, and made my sister’s wedding present possible (I built her and her husband a “whisper jar” – it’s a sort of embedded audio memory jar). There’s also an Adafruit minty boost, LiPo, and USB/DC LiPo charger in there. Thanks again for making such awesome products!” (read more) 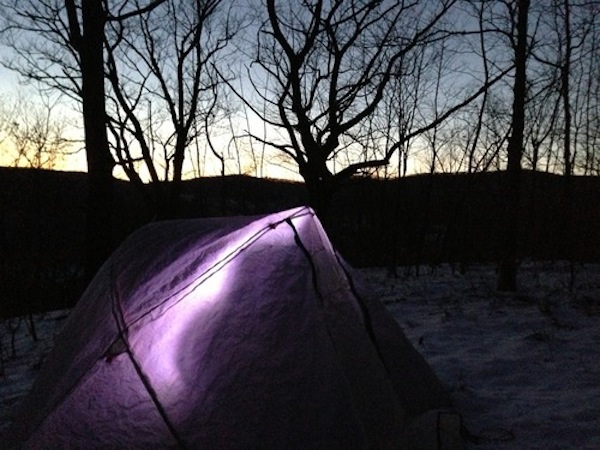 Craig Cannon, a camping and arduino enthusiast, shared his Tentduino project: “Tentduino is an add-on I made for my tent to indicate oncoming weather patterns. Basically, it’s an Arduino Uno attached to a barometer that sends information to an LED strip. The LEDs glow variations of red or blue depending on the amount of change in barometric pressure since the Arduino was turned on—red for a negative pressure change and blue for a positive change. The color’s brightness indicates the amount of change, i.e. a bright red means a large negative drop….” (read more)

Joshua Kane shared a work-in-progress blinky Halo Sword, getting help from the Adafruit Customer Forums. And he’s taking advantage of a lot of great Adafruit gear, too: “I have started the easy part of the project, roughing out the hardware. I still need to supply power to the Arduino Micro, find a small speaker to attach to the VS1053, as well as program the Arduino, but the installation thus far has gone smoothly. Any suggestions for a speaker and power supply would be greatly appreciated. Here are some photos of the work in progress, let me know what you guys think….” (read more) 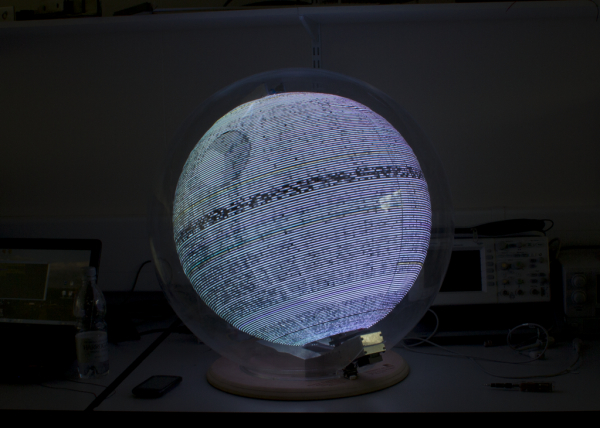 Craig A. Evans shared: “You may like the Death Star ‘hologram’ project carried out by my students using a Raspberry Pi. Image source here!” (read more)

Speaking of Asteroids, “Batslyadams” shared: “Vectors, or ‘My Man Inf Left A VEC and a 9 At My Crib.’ Commlink for a new vector arcade game I’ve been working on with Todd Bailey and Adam Stankiewicz. FPGA vector generator + g05 Asteroids monitor + amp/DAC board. Linux laptop generating second display on a monochrome ATM screen we picked up. Music by Windbreaker!” (read more)

Comments Off on Community Corner: Custom RasPi Asteroids Control Surface, How to Make Your LEDs Brighter, Defending Your Personal Space With Style (and Flora), and Other Tasty Crumbs From This Week in Adafruit’s Community