Replace Dropbox with BitTorrent Sync and a @Raspberry_Pi #piday #raspberrypi 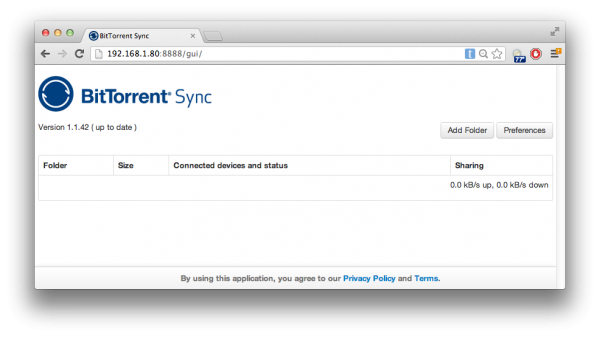 Jack Minardi’s BitTorrnet Sync as an alternative to Dropbox:

BitTorrent Sync is a free utility that uses the bittorrent protocol to keep folders in sync across devices. It can be used with OS X, Windows, Android and Linux. It is not however open source, which might be a deal breaker for some. But if this isn’t too big a pill for you to swallow, with a little bit of work you can use btsync as a free syncing solution.

While Dropbox requires you to keep a copy of your data on their servers, btsync never requires your data to inhabit a device you do not own. This is nice for security, but it means to sync between two devices they both need to be online at the same time. That is where the Raspberry Pi comes in. You can use the Pi as a node in your sync network, so a change to a file on any device will sync with the Pi and then other devices will get the change when they come online.

First we will set up the Pi as the central server and then we will connect our devices to it. (It is important to note however that the Pi is not a special “server” node, it is just a regular node like any other device.)

Read more and try it for yourself here!