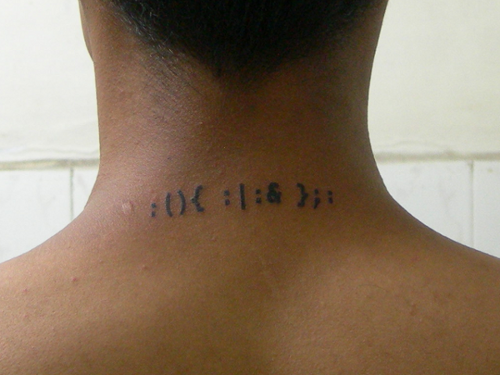 “Within the first 5 years of circulation, this net:art piece has propagated on computer screens, t-shirts and most impressively for its own author: tattoos.” via jaromil.dyne.org:

It was presented as a free and open source piece of net:art in 2002, along with a text titled la bohème digitale.

From the Wikipedia article Fork_bomb

In computing, the fork bomb, a form of denial-of-service attack against a computer system, implements the fork operation (or equivalent functionality) whereby a running process can create another running process. Fork bombs count as wabbits: they typically do not spread as worms or viruses. To incapacitate a system they rely on the assumption that the number of programs and processes which may execute simultaneously on a computer has a limit.

A fork bomb works by creating a large number of processes very quickly in order to saturate the available space in the list of processes kept by the computer’s operating system. If the process table becomes saturated, no new programs may start until another process terminates. Even if that happens, it is not likely that a useful program may be started since the instances of the bomb program will each attempt to take any newly-available slot themselves.

Not only do fork bombs use space in the process table: each child process uses further processor-time and memory. As a result of this, the system and existing programs slow down and become much more unresponsive and difficult or even impossible to use.

As well as being specifically malicious, fork bombs can occur by accident in the normal development of software. The development of an application that listens on a network socket and acts as the server in a Client-server system may well use an infinite loop and fork operation in a manner similar to one of the programs presented below. A trivial bug in the source of this kind of application could cause a fork bomb during testing.

Filed under: code — by jeff

Comments Off on ASCII Shell Forkbomb