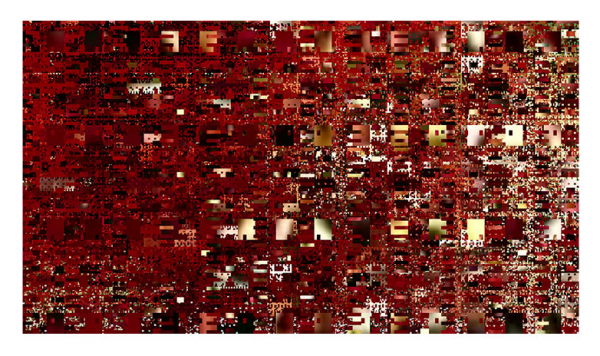 Casey Reas, who along with Ben Fry initiated the open source programming language Processing, sees his US debut of new work ULTRACONCENTRATED at bitforms gallery:

Reas’ latest work inhabits the increasingly voluminous, yet invisible, spaces of information systems and mass communication. Using a variety of materials, his new projects explore the behavior of television signals and entropy. Live video-driven software systems are featured in ULTRACONCENTRATED, as well as c prints, laseretched anodized aluminum pieces, and an illuminated sculpture created with Aranda\Lasch.

The series Signal to Noise intentionally disrupts the information of local broadcast signals. It investigates the field of technical images, as theorized by philosopher Villem Flusser, such as visual information transmitted as data, which relies on text-based instructions to “write” a picture. In the creation of this work, television content was captured from the air with an antenna. Reas edited, and then processed the appropriated material with his own custom software, which runs live in the gallery. The programmed logic is visible as a geometric lattice, building the illusion of a surface.

In these works, software’s capacity for precision and order is subverted. Each generative animation in the series scrambles a 20-minute segment of television captured from a major US network, such as ABC, NBC, Fox or CBS. They fracture and distort the intended images and narrative, to craft alternate, imagined spaces. Their construction is comparable to early twentieth-century collages built from the media of that time, and mid-century video collage.

Taking a Dada approach to the raw materials, each piece is silent and named after a specific moment from the broadcast script.

Getting Started with Processing by Casey Reas & Ben Fry – We are now stocking Getting Started with Processing – A Quick, Hands-on Introduction By Casey Reas, Ben Fry. We get asked the following a lot from beginners “how do you learn how to program” and our answer is usually “try processing”. It’s open source, free to download, it has a massive community and the things you learn will help you with learning Arduino which is usually within the context we’re asked. (read more)

Comments Off on Casey Reas ULTRACONCENTRATED