From the Forums: Update from a DIY film scanner project (Video) #arduino

From the video description:

This video shows a prototype do it yourself dslr film scanner. The camera is a D600 with a 55mm Micro Nikkor at 1:1 magnification. The scanner takes 25 pictures to scan a 4×5″ piece of film. It is controlled by an Arduino Uno, with two EasyStepper drivers for the stepper motors. For serious use, the lens would be masked, and there’d be dark material keeping outside light off of the film carrier.

And, from the initial project description on the forums:

A bunch of us at the large format photography forum are working on a DIY film scanner. Right now, there’s a big gap in quality and price between consumer film scanners, such as an Epson V700, and pro scanner, such as drum scanners (e.g. Aztek Premier) and pro flatbed (e.g. Screen Cezanne). In addition, pro scanners are getting difficult to keep running, as they often rely on old computer systems, and repairing the scanners is very expensive. As a result, some of us film enthusiasts are working on a film scanner, ideally one that can be scaled to various sizes, will give higher quality than a consumer flatbed, will be easy to build, and won’t be too expensive. Our idea is to use a dslr with a macro lens to take many pictures of one frame of a negative. We’ll then use software to combine the images. 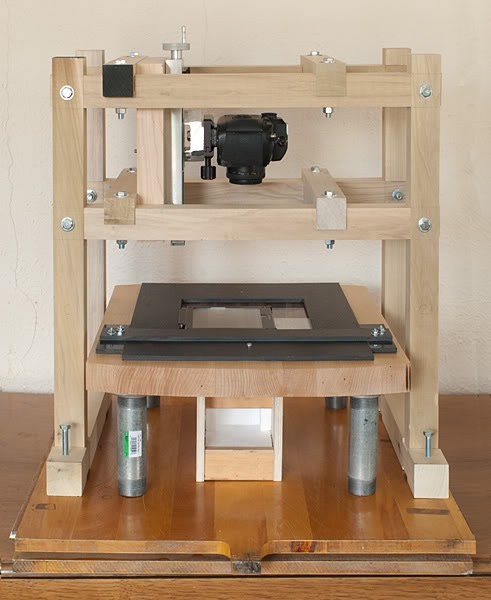 Comments Off on From the Forums: Update from a DIY film scanner project (Video) #arduino