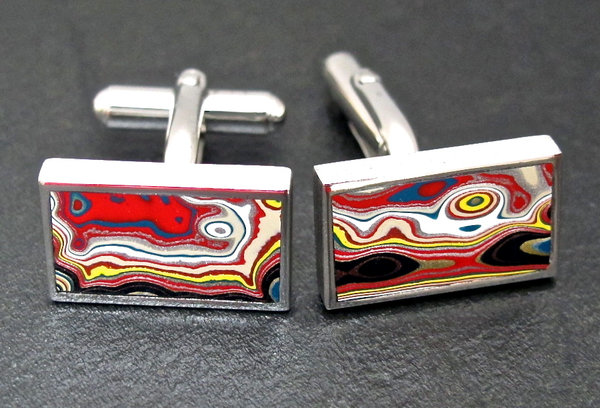 “Your Earrings Remind Me of Grandma’s Gran Torino” @NYTimes:

DETROIT — With its layers of colors and psychedelic swirls, fordite resembles jasper or Mexican crazy lace. And though fordite is crafted into eye-catching jewelry, it is not a gemstone — rather, it is dried paint that built up, layer upon layer, in factories that built automobiles long ago. Multimedia

And because many of the plants that produced it have been razed or mothballed, jewelry made of this material — known as enamel slag or “rough” — has nostalgic appeal.

“It’s a fun and interesting piece of history, a slice of Americana,” said Cindy Dempsey, an Illinois jeweler and designer who has been working with fordite for nearly a decade. “I’ve had people look at a piece and say, ‘That looks like a piece of the Ford Fairlane that I used to have.’ ”

The material was created through automakers’ now-defunct practice of spray painting cars by hand. Overspray in the painting bays gradually accumulated on the tracks and skids on which vehicles rested while they were painted. Over time, myriad colorful layers would build up in the ovens where the cars’ paint was hardened under high heat.