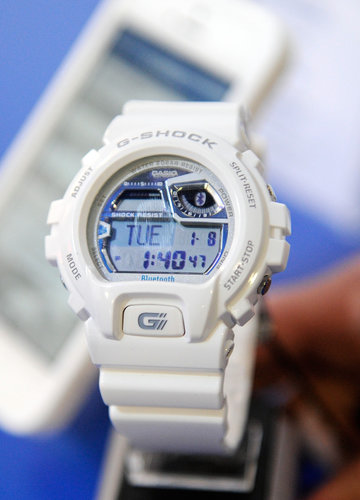 “In Advent of the Smartwatch, a Name That’s Been There Before” on NYTimes:

The geeky-watch niche is now drawing interest from some of the biggest names in technology. Apple trademarked “iWatch” in several countries earlier this year, which has fueled intense speculation that it is working on a wristwatch that would link with a smartphone. Samsung Electronics is expected to unveil a watch in early September that can make phone calls, play video games and send e-mails.

Last month, Sony revamped its Smartwatch, which communicates with smartphones and lets users play games or check Facebook by tapping their wrists. And a flurry of start-ups, like Pebble, are coming out with timepieces that claim to redefine what goes on the wrist.

The spike in interest in wearable computing devices is shaking up the digital watch industry, catapulting a sleepy business to the cutting edge of personal technology. In the process, established digital watchmakers like Casio are finding that they must contend with new competitors.

Comments Off on Casio Revamp for the Smart Watch Age #WearableWednesday