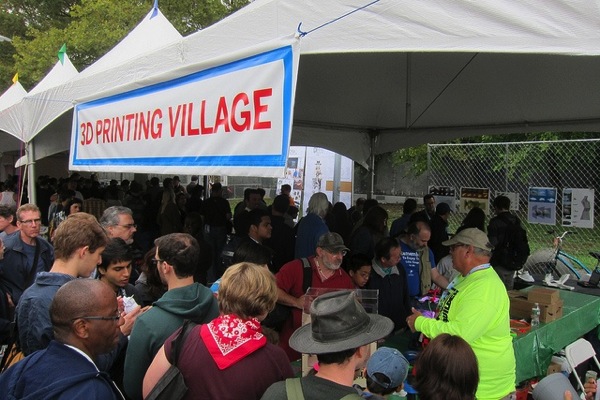 Adafruit community member John Abella, the beloved unofficial “mayor” of 3D Printing Village, reached out to us with an update about their upcoming activities at Maker Faire New York 2013. There are rumors that there will be a few extremely unusual treats this year, making this village one to definitely lock into your Maker Faire travel plans!

The 3D Printer Village is one of the largest collections for hobbyist 3D Printers in the World! Come see what you’re missing.

Since 2010 the 3D Printer Village at World Maker Faire has exploded from 12 people the first year to over 80 this year. Part of that surge in interest has been aligned with the topic gaining popularity, but part of it also comes from the changing technologies and reliability factors. At Maker Faire 2010 it was really a challenge to bring a printer that could print outdoors in the dust and work for 20+ hours of printing. Now all of the common hobbyist printers are so reliable that it’s become less about surviving the weekend and more about really trying to show off not just the tool – but what you’re making with the tool.

In that regard we’ve seen a big swing in the last few years toward artists, jewelry designers, inventors and other folks bringing their prototypes and showing off their iterative design process. Another big change for 2013 is the sheer volume of new printer designs – both from new companies and individual hobbyists alike. I anticipate we’ll see some of the largest and fastest home-built machines this year, and I know a few people are bringing DIY resin printers as well.

I wouldn’t be surprised if we had 75 printers going at once over the course of the weekend – there’s really no other place where you can see more or talk to more people involved in the field than you will at World Maker Faire this year.