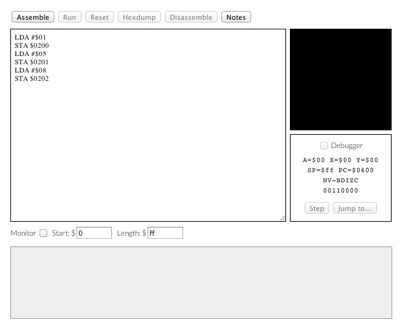 Why 6502? Why not a useful assembly language, like x86? Well, I don’t think learning x86 is useful. I don’t think you’ll ever have to write assembly language in your day job – this is purely an academic exercise, something to expand your mind and your thinking. 6502 was originally written in a different age, a time when the majority of developers were writing assembly directly, rather than in these new-fangled high-level programming languages. So, it was designed to be written by humans. More modern assembly languages are meant to written by compilers, so let’s leave it to them. Plus, 6502 is fun. Nobody ever called x86 fun.

Filed under: EE — by Margery Conner

Comments Off on Easy 6502 ebook (with a built-in emulator)