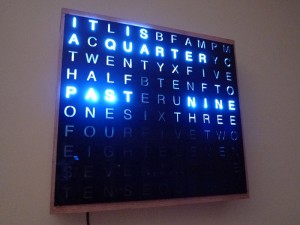 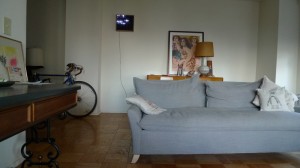 I built this word clock using parts from Adafruit.

It isn’t an entirely original idea, but I was inspired by Doug Jackson’s Wordclock, who in turn seems to have been inspired by German design firm Biegert & Funk’s Qlocktwo. There are a couple of different ways of creating the faceplate. Doug’s Wordclock uses a cut vinyl sticker, while Cello62 and Scottbez1 both use a stack of printed acetate sheets. I used the laser cutter here at Adafruit to create a black acrylic faceplate, which required creating the design with a vector graphics editor.

I built the frame myself using lumber from the hardware store, which was actually fairly time-consuming. Cello62 and Scottbez1 both use an inexpensive store-bought frame, which is another option.

I used the DS1307 Real Time Clock kit for timekeeping, and cool white LED strips for backlighting. The whole thing is powered by an Arduino Mega with the circuit built on an Arduino Mega Protoshield.