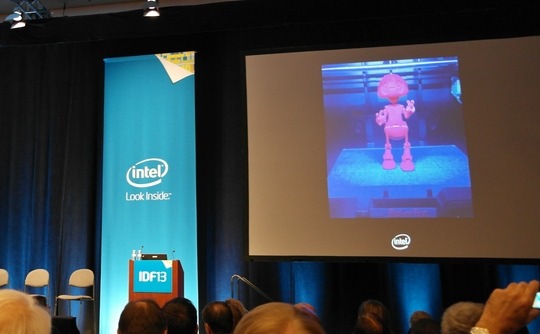 “We have been prototyping him with the idea of ‘what if these robots were completely open source, if they were completely social – a smartphone equivalent of a robot?'”
Intel has also created another type of robot named Paul, which can talk to Jimmy and interact with it.

Intel will launch its Twenty-first Century Robot project next week at the Maker Faire in New York. From that point, you’ll be able to download material online that gives you steps to build robots like Jimmy, Johnson revealed.

“[Jimmy’s] specs are online so you can build your own and 3D print it via open source,” said Johnson, as he excitedly promised a series of future robot maker fairs, where Intel will bring people together and give them robot-building kits, enabling them to eventually share their designs with other people.
“Imagine a future with robots – design them, print them, program them and share them,” Johnson concluded.