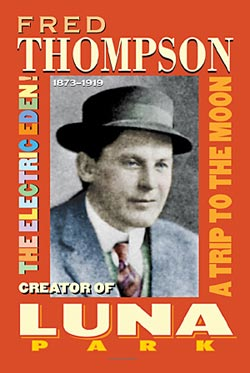 As a special pre-Maker Faire treat, #3DThursday will be celebrating a number of 3D designers from the desktop 3D printing community, culminating in the community #3DThursday Happy Hour event later tonight.

I asked Fred Kahl (the “Great Fredini” who you might recognize from his Coney Island Scan-A-Rama project) about his design influences and he brought up two architect duos, one pair from before things like 3D printing existed and one that is now executing architectural-scale projects at 3D printing’s bleeding edge. And at heart, there are certain spiritual similarities — and potential opportunities to learn from both for creating new work:

My inspiration for 3D design is the architect Frederic Thompson, designer of Coney Island’s original Luna Park, build more than 100 years ago. Nothing remains of the park now, but the unique forms of this lunar landscape have inspired me for decades. A dropout of the Beaux Art academy in Paris, Thompson created a fantasy landscape that no one had ever seen before. I think he was the first postmodern architect- he combined eastern minarets and pagodas with renaissance detailing and fairytale castles to create a visual spectacle that transformed again as night fell and the park was lit with a new invention- a quarter million Edison lightbulbs. They called it the city of fire- ironic because that is how it was later destroyed. I’ve collected some images here. How does it relate to 3D printing? Actually, the whole thing was built using an additive process — skilled craftsmen built the entire thing using plaster built up on lath forms, then sculpted it as it dried. Nothing was built to last.

This week in 3D Printing news we heard about Digital Grotesque — the 3D printed room. It is an elaborate, fully-enclosed life size room that is entirely 3D printed, conceived and created by architects Michael Hansmeyer and Benjamin Dillenburger. This project inspires me in that it is architectural and is something that can only ever be created by 3D printing. I always wonder what Frederic Thompson would be building if he were alive today, and I think this might be it.

Here are more details about Fred Thompson and Skip Dundy from ConeyIslandHistory.org:

Fred Thompson and his business partner, Skip Dundy, unveiled their greatest creation on the night of May 16, 1903. Luna Park, a fantasyland of exotic towers, minarets, and domes, strung with half a million electric lights, opened for business to an enthralled crowd who had never experienced anything like it.

Thompson began his career as an architectural draftsman and gained amusement experience at the great fairs of the late nineteenth century. Thompson and Dundy became known at the 1900 Buffalo Pan-American Exposition for their attractions including an illusion show called A Trip to the Moon. The show simulated a moon landing complete with imitation green cheese and midget moon men.
When the fair closed, they moved the show and several other attractions to George C. Tilyou’s Steeplechase Park in Coney Island. The partners soon had a falling out with Tilyou and relocated their moon ride to the Sea Lion Park site several blocks away. They leased the park from Paul Boyton and used its Shoot-the-Chutes lagoon as a centerpiece for Luna Park, named for Dundy’s sister, Luna. The park, an instant success, featured the Electric Tower, the Dragon’s Gorge, a wild animal show and circus, a helter-skelter slide, the Old Mill, and hundreds of other rides and attractions. Elephants and camels strolled the grounds.
But it was the park’s fantasy architecture that was the main draw. Thompson boasted how he “eliminated all classic conventional forms” and for his model drew on “a sort of free Renaissance and Oriental type.”

Luna Park remained popular, but Thompson’s personal problems drove it into bankruptcy in 1911. After he died in 1919, the park went through a series of owners and fires until it finally closed in 1946.

And here are more details about Digital Grotesque.

We aim to create an architecture that defies classification and reductionism. We explore unseen levels of resolution and topological complexity in architecture by developing compositional strategies based on purely geometric processes.

In the Digital Grotesque project, we use these algorithms to create a form that appears at once synthetic and organic. The design process thus strikes a delicate balance between the expected and the unexpected, between control and relinquishment. The algorithms are deterministic as they do not incorporate randomness, but the results are not necessarily entirely forseeable. Instead, they have the power to surprise.” (read more)