Artist Cohen Van Balen created an anti-rabies forest as part of the future city at the Trienal de Arquitectura de Lisboa this year. via dezeen.

“We were inspired by the idea of symbiosis, the relationships between plants and animals, and the beautifully complex systems in nature where an animal and a plant keep each other alive…We wanted to design a plant to keep a wolf alive from extinction.” 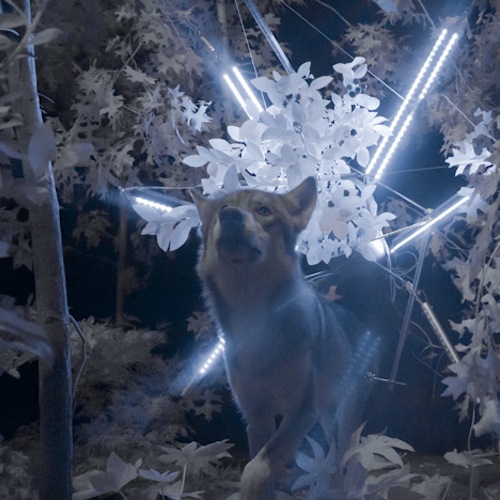 The Wilds – And Nowhere a Shadow There is no nature anymore. We are wandering a new kind of wilderness, where the line between biology and technology is becoming increasingly indistinguishable. Through genetic modification, engineered meat, cosmetic surgery and geo-engineering we are remaking our world from the scale of cells to the scale of continents.

The woods, wild and mysteri­ous from afar, appear as a stage on which every element is considered. Genetically engineered plants, artificially sustained, are hanging from the trees, embedded in the ecology yet detached from it. Their scaffolding systems of gleaming steel and neon light sway in the wind, waiting.

Grey wolves approach the struc­tures during the night to scratch their body on the steel branches. In an intri­cate arrangement of devised symbio­sis, the contraption takes on the role of host organism. The wolf’s move­ments generate electricity for the system, while the blueberries are engineered to contain rabies vaccine in its fruit to protect the animal from self-destruction. Cameras transmit footage of the wolf’s presence around the globe, adorned in invisible garlands of elec­tric display, to be enjoyed by those whose passion for the spectacle of wilderness sustains its survival. 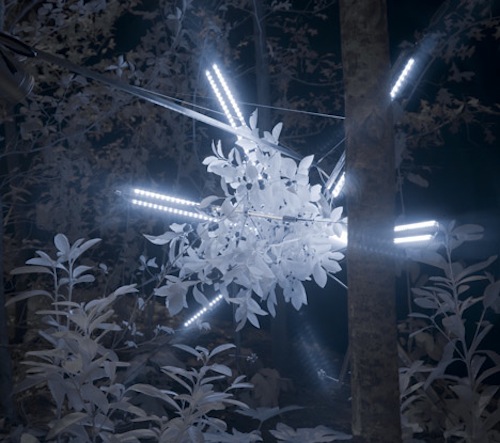 Filed under: art, science — by molly

Comments Off on Animal Plant Symbiosis at the Lisbon Triennale