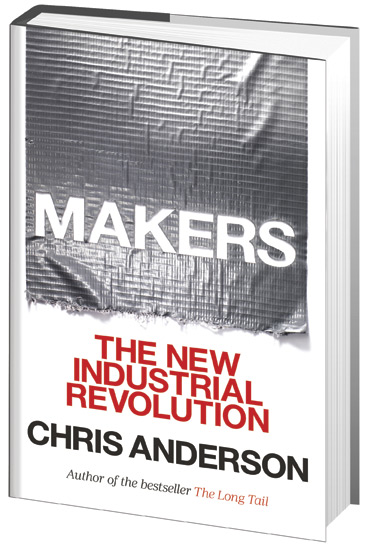 Each week, I share some of the books and other resources I have found inspiring in my investigation into 3D design for 3D printing. The full list lives here on the pinboard “3D Design to 3D Print Inspirations” and each #3DThursday I share about those that I most highly recommend. And this one is available in the Adafruit store!

Editor-in-chief at WIRED, Chris Anderson covered the rise of desktop 3D printing from its earliest days, and his MAKERS book represents a significant synthesis of thoughts he had about the direction of things up to the point at which he departed WIRED to dive into the open hardware scene with both feet.

Significant in here for 3D designers are his thoughts about these tools within the greater context of maker tools. What makers can gain from using 3D printing as the production process for certain elements but not others, for the projects they are inventing and sharing with the world.

MAKERS is something of a snapshot his opinions about these topics from up to the summer of 2012, and a lot has changed since then. (And I have my own thoughts on the early days of MakerBot having been there.) So I have continued to catch posts and talks from Anderson to keep up with his evolving analysis of the changing landscape for makers + 3D printers. (I have included his Open Hardware Summit keynote from 2012 which I found a particularly helpful strong business argument for keeping projects open.)

From his book descriptions:

Every country, to remain economically strong, must make physical products if it doesn’t want to become a nation of burger flippers and checkout clerks. Yet in America and Europe, it has become harder and harder to sustain manufacturing as entire industries, from clothing to electronics, have shifted their factories to Asia and other low-cost regions. In the United States, manufacturing employment as a percentage of total working population is at a century-long low.

The solution, Anderson says, is in a desktop manufacturing revolution that will change the world as much as the personal computer did. The tools of factory production, from digital fabrication to online factory services, are now available to everyone; garage start-ups can make products in batches as small as a single unit or as large as tens of thousands. Anyone with an idea can set assembly lines into motion with little more than a keystroke.

Moreover, thanks to crowdfunding and social financing at companies like Kickstarter and Quirky, entrepreneurs are no longer dependent on venture capitalists or investment banks to finance their ideas. And with the global reach of the Internet, entrepreneurs are able to sell their products to consumers at home and around the world instantly, while start-ups like Etsy create new platforms and markets to bring buyers and sellers together.

Just as the Web ended the monopoly of mass media, so it is now ending the monopoly of mass manufacturing. Over the next ten years, Anderson explains, countless micro-manufacturers, based on open-source design and DIY manufacturing, will help drive the next big movement in the global economy as the power of bytes—the Long Tail—is transformed into the power to make things again, the Long Tail of things.