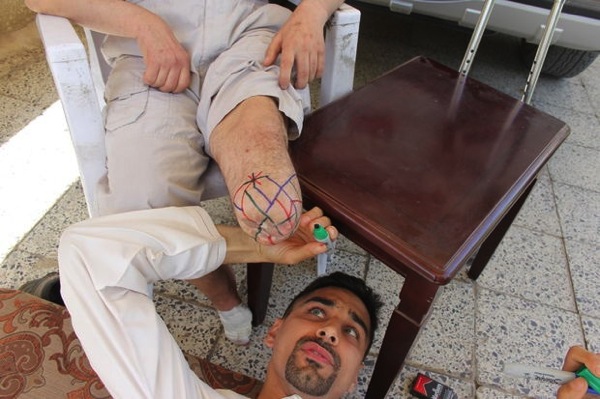 Maker, development engineer, and Autodesk consultant Bilal Ghalib has been activating hackerspaces and makerspaces in Egypt, Beirut, Baghdad and other cities as a part of his effort GEMSI (Global Entrepreneurship and Maker Space Initiative). One of the goals for his initiative is to pursue projects like open source prosthetics and medical equipment — helping local makers in regions where it is difficult to obtain products and engineering supplies produce what they need and what they can produce for victims of car-bombs, diabetes, and more.

From his Instructables tutorial:

Working on this for a while now but I have made some progress that I’d like to share. Not finished because the hacked solution still causes some pain, but this is helping my cousin Zaid with the pain that his prosthetic is giving him.

While in Iraq last April I came across my cousin Zaid. Zaid’s an awesome guy with an awesome family with a horrible problem. He’s diabetic. Normally that wouldn’t be too much a cause for concern in the west. But in Iraq and especially during the 13 year long sanctions he was unable to get appropriate treatment. One of the consequences of not having appropriate car for a diabetic is the atrophy of your extremities. He’s been losing toes and now has lost the lower half of his left leg.

Being a hacker and problem solver and newly equipped with 123D Catch I thought I could take a scan of Zaid’s leg and bring it back to the states to help with the creation of a 3d printed better fitting prosthetic. Creating a catch of a person’s flesh is a challenge so I came up with a solution to draw feature points on his stump as a way of doing point matching. 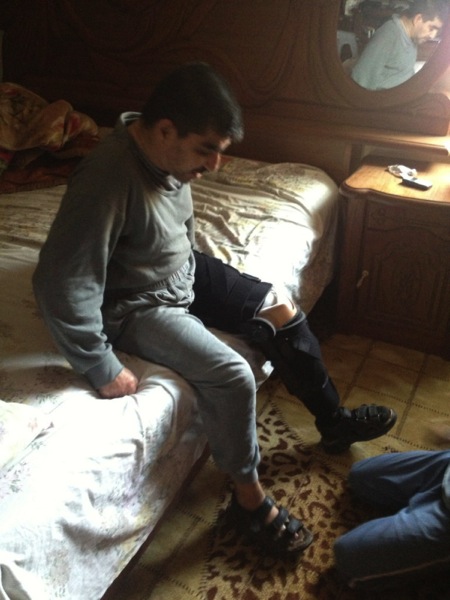 Adafruit’s Makers, Hackers, Artists and Engineers Community under the subsection “Make the World” is hosting this month long effort. Community members will post up with what they can help with, suggest people in need, and post pictures of their accomplishments/builds. In addition Makers will be able to find support for the creation of Robohands in the e­NABLE Community on Google+.