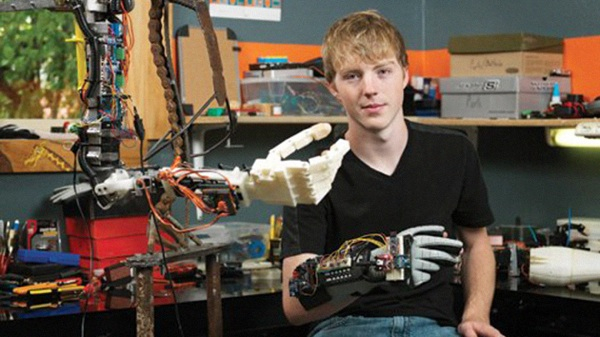 Young Arduino enthusiast and maker 17yo Easton LaChappelle, of Anthromod, created a sub $400 prosthetic arm that can be controlled wirelessly by your brain.

Easton LaChappelle was 14 years old when he took his first steps towards his goal of creating a robotic arm that is lighter and stronger than a human hand. He created his first iteration out of LEGOs, servos, and fishing line — built using techniques he picked up on maker electronics sites such as Sparkfun, Adafruit, Instructables, Hack-A-Day because he couldn’t find local resources to teach him the electronics and skills he needed. He placed 3rd at the Colorado State Science Fair, but it was while at the fair that he found a new mission for his project. He met a 7yo girl attendee who wore a state of the art prosthetic arm, a device that LaChappelle discovered cost around $80k. He vowed to make a better prosthetic for less money — so that anyone who needed one could get one.

He went back to the drawing board to reinvent his project as a fully-operational mechanical prosthesis. Shifting from LEGO and traditional building methods to 3D printing, he started designing models in Solidworks, and working with friends online and off with 3D printers and the robotics and electronics, receiving additional support and mentoring from Brook Drumm at PrintrBot and Jeremy Blum.

Over the next three years, working with many online resources and collaborators — joined by 3D designer Chris Chappelle in Manchester, England (no relation) as a close collaborator to boost the 3D printed part design development while he focused on electronics and robotics — he managed to complete a project that took 2nd place at the Intel International Science and Engineering Fair, and was able to demonstrate his prosthetic arm project to President Obama. He and Chris Chappelle launched a successful Kickstarter project and continue to make new, lighter, faster iterations of their “Anthromod” robotic arms. Currently, Easton is also participating in NASA’s Robonaut 2 project.

From an article featuring LaChappelle in Fast Company:

The first version was a wireless hand that was controlled by a glove. “I found flex sensors and sewed them onto a glove. I made my own custom PCB boards and a custom servo shield. Then, I added XBee modules for wireless communication.”

Now, the hand has more functionality than a traditional prosthesis and more strength than a human hand. The next generation can sustain 50 pounds of weight on an individual finger. “The strength of the hand is so great that it’s almost dangerous,” LaChappelle says.

The system uses a wireless brain EEG headset that picks up 10 different channels of the brain to move the arm. And, since accessibility is key, the prosthesis will be sold for less than $400. Unlike some of the more advanced options that are currently on the market, amputees don’t need a risky surgery to use the arm, it’s something that can be taken on and off.

The technology is so useful that it’s also caught the attention of NASA, where LaChappelle is now working as an intern on the Robonaut, a robot that will become a working member of the space crew. The Robonaut mocks human movements to perform maintenance tasks and duties that are too dangerous for astronauts. 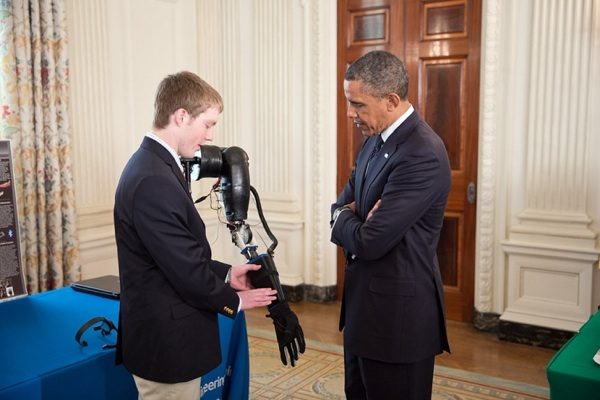 Comments Off on #maketheworld – Easton LaChappelle of Anthromod – #3DThursday #3DPrinting