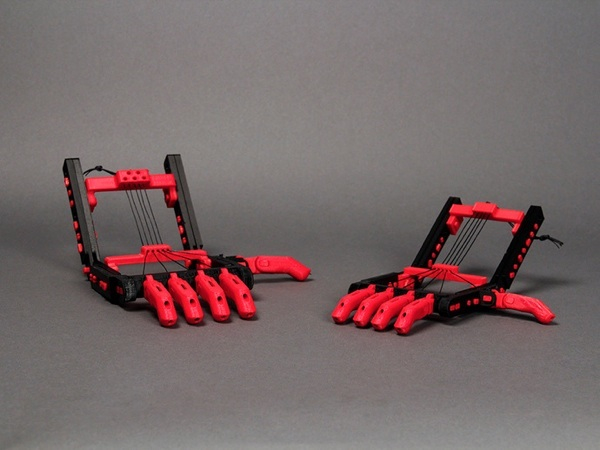 The 3D printer company MakerBot became deeply involved in the Robohand project earlier this year, offering machines, expertise, and a platform to share their mission.

Want to get started building a Robohand? Check out the simplified Snap-Together Robohand that MakerBot’s Michael Curry worked with Richard and Ivan to create.

MakerBot heard about the Robohand project in January 2013. Richard had been trading ideas with Ivan Owen, a collaborator in Washington State, for several months. Ivan used his prior experience with mechanical prop hands to make design suggestions, while Richard attempted to replicate the designs in his workshop.

The process was taking weeks and months per cycle. For us here at MakerBot, that was too much wasted time. We knew our 3D printer, the MakerBot Replicator 2, could take this important work to new heights. We saw their collaboration and the work they were doing as groundbreaking, and we asked Ivan and Richard to accept a donation from us: a MakerBot Replicator 2 for each of them, one in Washington, and another in South Africa.

If the tool was useful to them, we hoped they would share their work on Thingiverse.com for the world to download. It turns out the MakerBots were incredibly useful, and the guys have followed through on their promise. Just hours after they received their packages from us here in Brooklyn, the two collaborators were sharing files back and forth, testing the design in one place and doing another iteration on the other side of the world. Richard says it took the prototyping process down from weeks to just 20 minutes.