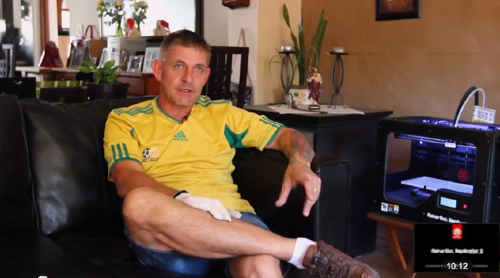 After losing four of his fingers from his right hand in a carpentry accident, South African master carpenter Richard van As vowed to lean on the skills of his trade to build his own replacements. But he was struck by an intriguing opportunity while watching a viral video created by Bellingham, Washington amateur special effects artist Ivan Owen. Owen had designed and built an oversize, functioning mechanical hand: what if van As combined this effort with his own background to recreate this experiment on the human scale? The two began a collaboration together, sharing ideas, sketches, and eventually design files back and forth across the world on the Internet, sharing a functional, 3D printable prototype on Thingiverse as “robohand” early in 2013.

While the project started initially as a means of bringing their two expertise together to make an affordable, functional set of “mechanically driving fingers” for van As, they soon identified another crucial beneficiary for their design efforts, young children born with Amniotic Band Syndrome that causes the constriction and “pre-amputation” of fingers during early stages of prenatal development. They discovered that their efforts could be applied to creating inexpensive, functional prosthetic fingers for these children as well — a life-changing opportunity as the typical professional prosthetics available to these children were upwards of $10k each a set, making it too expensive to match the high speed of development so that the children would have well-fitting, well-functioning prosthetics during crucial stages of early childhood.

Sharing the set of files they created for the Johannesburg area child Liam as Robohand on Thingiverse.com — ”Complete set of mechanical anatomically driven fingers” — van As and Owen offered an open source, affordable, functional prosthetic hand platform that could be used for other children suffering from ABS. The staff at MakerBot noticed this story on Thingiverse at this point and sent a MakerBot Replicator 2 to van As and Owen to help speed up their process of prototyping and development — which has allowed them to build an online design community

The short documentary created by filmmaker Annelise Jeske for MakerBot is a great resource for learning more about where this story headed next after MakerBot became involved, and showcases Liam’s experiences with Robohands. Today, “Robohand” has become a community of designers and craftsmen angling to create “fully functioning mechanical fingers for the lay man and hands for children.” Also, the results are successful enough that Richard van As has resumed his carpentry career.

Since mid 2011, we have been on an adventure to create mechanical fingers that can replace lost digits.

Follow our Journey of self discovery as well as the incredible work done to create fully functioning mechanical fingers for the lay man and hands for children. The first ever in the world!

We have published this as open source so there is no patent and the design is available for free. 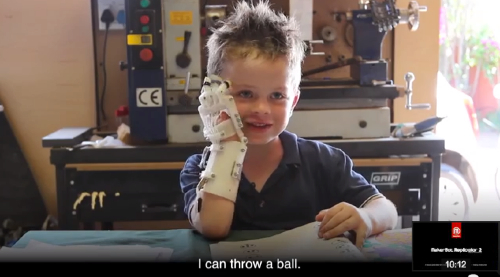 Comments Off on #maketheworld – Richard van As of Robohand – #3DThursday #3DPrintingRobohand