Bithead made four awesome costumes for his family using a lot of Adafruit products such as RGB LED flexi-strips, touch wheel controller for analog RGB LED strips, solderless analog RGB LED strip clip, and 8×8 LED matrix with I2C backpack. Via the Adafruit forums! “After the first suit was successfully completed for my daughter, I went forward with creating the same suits for my son, wife and myself. As expected, I got better each time and had all 4 suits created very quickly. The touch-wheel controller is very easy to use – on/off, touch a color to activate the color, and a mode button to cycle through various colors and even some automatic sequencing. Very cool.” (read more)

There are people making amazing things around the world, are you one of them? Join the 63,454 strong! And check out scores of projects they shared this week after the jump! 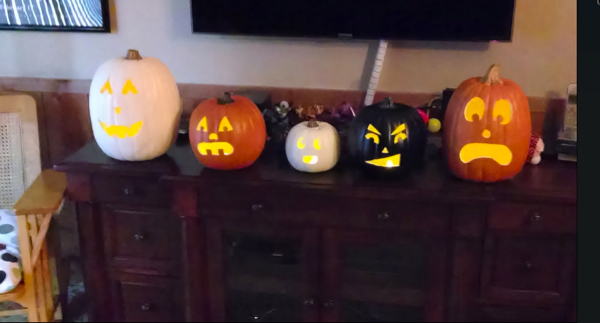 Alex Frank shared: “The pumpkin project is something I dreamed up this time last year having seen the thousand’s of other pumpkin projects I thought why not build my own. What I have is a PIR sensor (more on that choice later) an uno and a pi. When the PIR gets tripped the uno sends a signal to the pi and a playback of a script is started. When the playback is over the pi tells the uno to start watching the PIR again. Yep, that’s right, it’s another talkingnpumpkin project.” (read more) 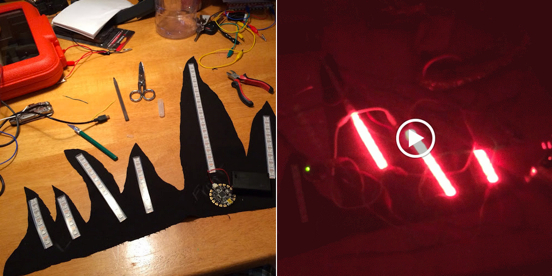 Matthew Hillis has been sharing progress he and his daughter are making on their “Catching Fire” dress for #electrichalloween: “Working getting the fire animation in my LEDs is a little tricky. Plus I have the accelerometer sensor I want to integrate into the code. My idea as she walks the fire gets bigger or other changes in the animation.” (read more) 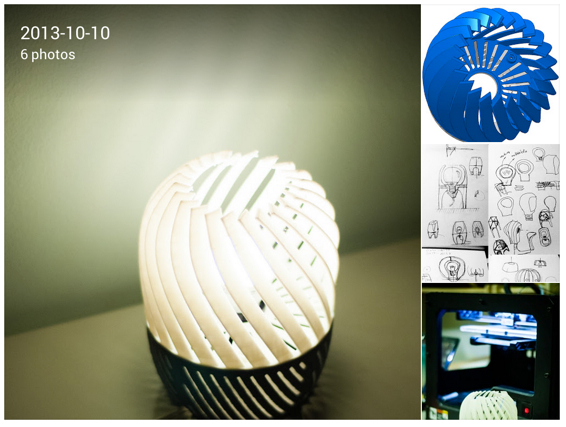 Jose Pacheco shared: “New 3D printed lamp I have designed and made at the FabLab Barcelona: http://www.thingiverse.com/thing:161436.” (read more) 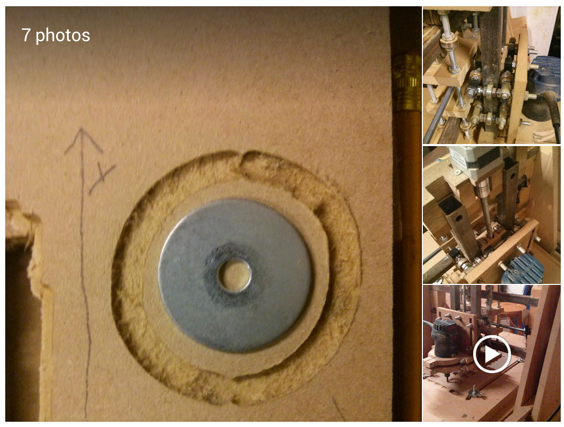 Daniel Would shared: “Today I finished the latest (mk iii) z axis on my diy cnc router. I’m very happy with how it turned out. Feels rock solid, and runs very smoothly up and down. My previous efforts all had a pronounced wobble back and fourth when moving up or down. I now get very little flex at the router tip. this is important as slight changes of height when already deep in a cut need to be straight up or down, the wobble would press the whole length of cutter against the cut wall which could cause problems.” (read more) 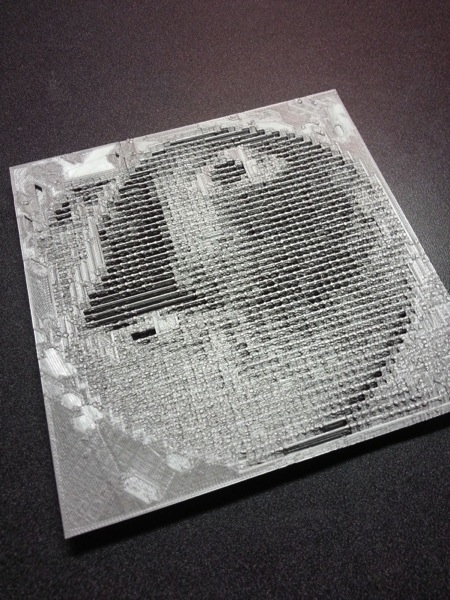 Matt Bell shared his Blender + python hacking to create this Grayscale Anglegraph: “In the past I probably would have chosen to do this project in a stand alone c++ or c# app. This time around, I decided to write a python script for Blender which is a great open source 3d creation tool that is cross platform compatible. I decided to go this route because it meant that while testing the geometry I could quickly simulate real world lighting on the object and see if this would actually work the way I thought it would. Also, in the end I wanted to be able to 3d print the object so having Blender’s export capabilities available is nice. As an added bonus the code is nice and portable between operating systems and you don’t have to deal with getting a project setup and linking properly (which I always find to be very bloody painful) The code is pretty simple and consists of just a few steps: Loop across the pixels in the image to create column paths, extrude path to get some depth, then convert the paths to meshes and join them into one big happy mesh….” (read more) 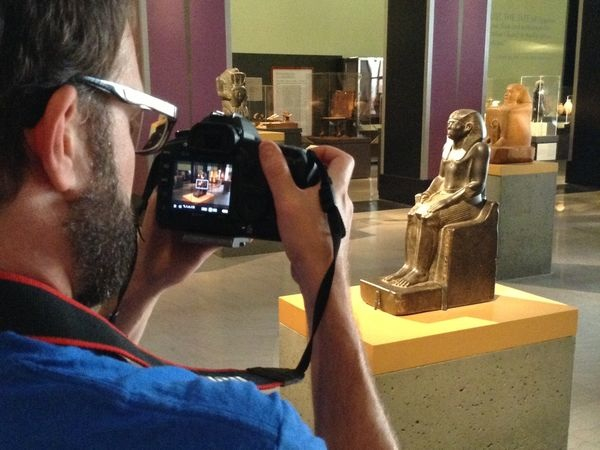 David Huerta from the Brooklyn Museum shared with a recent3D Scanning and Printing Chess Set project: “We worked with our conservation staff to get access to the pieces which weren’t on view, including the roughly 3,000+ year-old Egyptian gaming piece Bob and I were a little nervous around. Using the same software combination of 123D Catch and Meshmixer, the scanned models were then generated and cleaned up and made watertight for printing. Having the 3D models ready to print, I worked on resizing them as chess pieces, making sample prints with some unsightly lime-green PLA we had laying around. Chess pieces have been remixed a lot over it’s history, varying from the small magnetic sets you would find in travel stores to the more elaborate Frank Gehry set. By and large there’s no universal standard for the size and proportions, but the US Chess Federation has some guidelines on the proportions relative to the board which were [partially] adopted in the final design of the set….” (read more)

ch00ftech shared some really special LED earrings: “Something like two years ago, I had a friend who wore a pair of Christmas light earrings around the holidays. They were the big bulby kind, and they looked so much like the real thing that she was constantly asked if they actually lit up. That got me thinking: how hard would it be to make a pair of Christmas light earrings light up? The goal of this project was to create a pair of tiny light-up earrings that are totally unobtrusive and look and feel more or less like normal earrings. This involved creating the smallest circuit board I’ve ever made and packing it into a tiny case where none of its components would be accessible from the outside. It’s also the first project I’ve ever made that can recharge its own batteries.” (read more)

Leslie Birch’s FLORAbrella was one of the two winner in the Adafruit + @element14 Challenge: “Wow, it has been quite a project. From my beginning research of unique umbrellas, to wiring individually addressable LED Neopixel strips and facing 3D printing – I’ve just learned so much. Adafruit’s Forum has been outstanding, along with the support I’ve received from the Element 14 folks. Anyway, I was going to shoot my video last night, but yesterday my dog had to have a sudden operation to remove a cancerous tumor. Don’t worry, it went well, but after seeing him so fragile and woozy, there was no way to leave him in the house alone. So, I had to shoot tonight with the help of my husband and a friend (love you, Annarita Gentile!). It was all done with an Iphone, how funny is that?? So, without further ado, this one is for you. Hugs, kisses and open hardware to tout le monde! (hint, hint).” (read more)

“Sausage” shared a re-creation of the classic board game Mastermind, built around an Adafruit NeoPixel 8×8 and other Adafruit goodies, on the Adafruit Forums: “The object of the game is to correctly guess the hidden code. The code consists of 4 “digits” of six possible colors: Red, Yellow, Green, Blue, White and Black (here substituted with Magenta). Press the “Enter” button to choose among the six possible colors (advanced in order: Red, Yellow, Green, Blue, Magenta,White), then press the “Select” button to advance selection to the next column (currently selected column blinks). Once all columns are filled with selected colors and you are satisfied with your guess, Hold the “Select” button for 2 seconds and release to confirm your code (row will blink). Press “Select” again to finalize your code and view “score” feedback or “Enter” to cancel, allowing you to modify your code. Feedback is given in 4 columns next to your guess. Red LEDs indicate the number code digits that are the correct color and position, White indicates a correct color, but incorrect position.” (read more)

Linda Kasper’s ColorCam was the second winner in the Adafruit + @element14 Challenge: “This is it! My final post! This is were you get to see my ColorCam and this nifty video I made. First of all I would like to take the opportunity to thank Element14 and Adafruit for selecting me for this challenge. It was one bumpy, but instructive ride! Also a big warm thanks for my boyfriend Victor Sluiter, who has helped me so much along the way. I can honestly say I wouldn’t have been able to do this without him! So, thanks honey! So here is my video, I hope you all like it! Please, let me know what you think or if you have any questions.” (read more)

Comments Off on Community Corner: RGB Stick Man Costumes and Ten More Great Projects from the Past Week in Adafruit’s Community