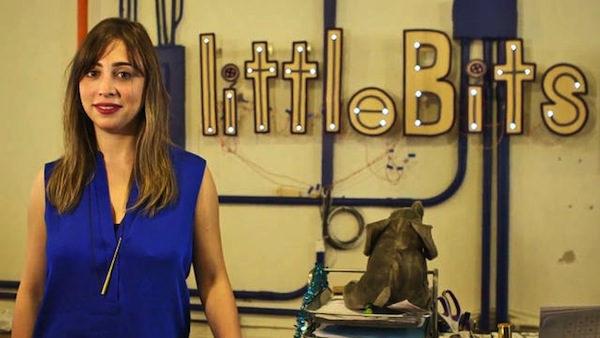 Ayah Bdeir is the founder of littleBits, an experimental gender neutral engineering toy kit and karaj, an experimental arts, architecture and technology lab in Beirut, Lebanon. To sum up Bdeir’s world view on and aspirations for future women engineers and makers:

“Engineering should be democratic. I want people to be able to apply the technology that I use for their own ideas.” About her company, littleBits, Bdeir says, “It’s a means to achieve the mission…It’s about breaking down the boundaries between disciplines and allowing everybody to create and everybody to understand the technological world that we live in.” 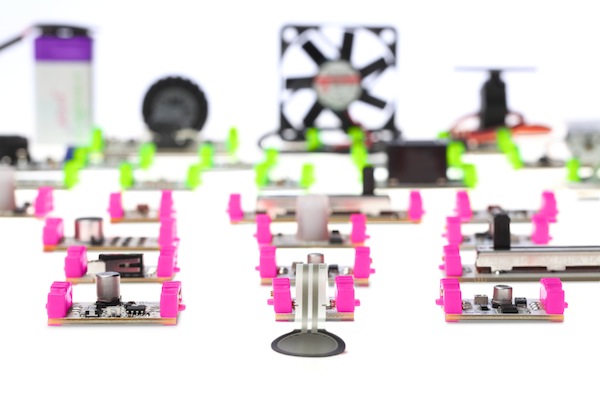 Only 6 months after its creation, litteBits was acquired by MoMA for the museum’s permanent collection, won best of ToyFair, was featured on TED, BBC, Forbes and Popular Science, and was called by Bloomberg TV “LEGO’s for the iPad generation.”

Prior to founding littleBits, Bdeir received a Master’s Degree at the MIT Media Lab‘s Computing Culture Group. Prior to that, Bdeir studied Computer Engineering and Sociology in the American University of Beirut.

After a brief, unsatisfying stint working in finance, Ayah got a fellowship at Eyebeam Art+Technology Center and began developing interactive electronics. She taught graduate classes at NYU and Parsons and taught workshops to get non-engineers, particularly young girls, interested in science and technology. She also creates art projects that challenge misconceptions both about women and Middle Eastern Culture, including Teta Haniya’s Secrets and Arabiia.

In 2010, Bdeir was granted a fellowship with Creative Commons in recognition of her work, including spearheading the first Open Hardware definition and co-chairing the Open Hardware Summit at the New York Hall of Science in September of 2010 and 2011. Just recently, in 2012, Bdeir was awarded one of 25 TED innovators fellowships.

Bdeir lives and works in New York City, where littleBits is based.

October 15th is Ada Lovelace Day! Today the world celebrates all of the accomplishments of women in science, art, design, technology, engineering, and math. Each year, Adafruit highlights a number of women who are pioneering their fields and inspiring women of all ages to make their voices heard. Today we will be sharing the stories of women that we think are modern day “Adas”. We will also be referencing women from history that have made impacts in science and math, so keep an eye on these footers for more inspirational women!

Comments Off on Ayah Bdeir of LittleBits #ALD13 @findingada