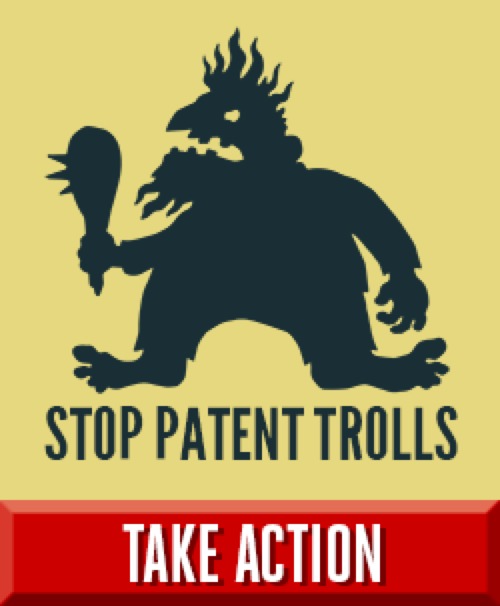 The Innovation Act of 2013, introduced by House Judiciary Committee Chairman Rep. Bob Goodlatte (R-VA) and co-sponsored by a bipartisan coalition, offers a host of fixes to the problem of patent trolls—whose abusive litigation has exploded in recent years, putting a drain on our innovation economy and harming innocent end users.

Patent trolls buy up patents and use them offensively against unsuspecting businesses—without creating or selling anything themselves. Making broad claims of infringement based on patents of questionable validity is the troll’s favorite move. Most defendants choose to settle because patent litigation is risky and expensive—and trolls offer settlement amounts that, although still incredibly burdensome, are far cheaper than a lawsuit. Businesses who are targeted—including cafés running Wi-Fi, app developers, offices using scanners, and podcasters—lose both time and money, and innovation suffers.

In a televised question-and-answer session in February, President Obama weighed in. “They don’t actually produce anything themselves,” he said of trolls. “They’re just trying to essentially leverage and hijack somebody else’s idea and see if they can extort some money out of them.”

Extracting a Toll From a Patent ‘Troll’ at the NYTimes that references Limor “Ladyada” Fried’s question to the President of the USA (video above). 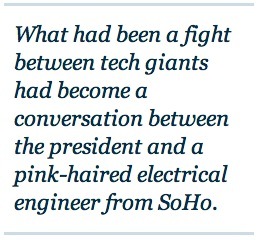 More Than Gimmicks: How Obama’s Tech Tools Are Shifting the Debate – Nancy Scola – The Atlantic.

About a third of the way into the 45-minute “Fireside Hangout,” Obama fielded a question from Limor Fried, an electrical engineer and proprietor of Adafruit Industries, a New York DIY and tool shop. (Google picked the president’s five interlocutors, based largely on their online popularity, and flagged for the White House ahead of time which topics would likely come up.) “When I go around and talk to other entrepreneurs,” Fried explained to Obama, “what I hear is they’re worried that if they become successful they’re going to be targeted by software patent trolls.” Sure, the president and Congress have passed some legislation on patents, she granted. But what about that?

What had been a lawyer-saturated fight between tech-industry giants has become a conversation between the president of the United States and a pink-haired electrical engineer from SoHo.