Is 3D Printing the Future of Disaster Relief? #3DThursday #3DPrinting 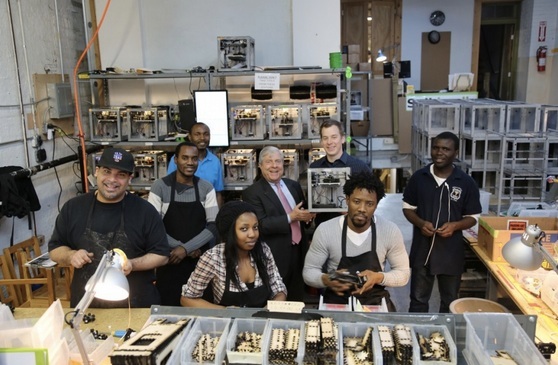 Is 3D Printing the Future of Disaster Relief? from Motherboard:

Most 3D printers are slow and have material limits in what they can create. They’re not exactly the first thing you’d think to ship to a disaster-stricken area the next time there’s a deadly hurricane, tsunami, or landslide. For now, at least.

But advocates for the technology say that it’s only a matter of time before we’re shipping raw materials and 3D printers instead of medical supplies to the site of a disaster. 3D printers are already being used in the medical field to create customized tracheal valves, umbilical cord clamps, splints, and even blood vessels. A group in Haiti is already using the umbilical cord clamps to show locals the potential for the technology. And it’s only a matter of time before they get deployed in a disaster scenario, according to Thomas Campbell, a Virginia Tech professor and senior fellow at the Atlantic Council.

“There’s great potential in the developing world for relief efforts,” he said. “If you have a medical device 3D printer on the ground and you suddenly have a hurricane or tsunami whip through, instead of having to ship everything there, you may just have a fab lab of some sort and produce the crutches, splints, and whatever else you need there on the ground.”

Still, many 3D printing projects are still novelties. And in a significant disaster with thousands of casualties, there’s certainly not time (or money) to be custom designing individual splints or to watch a 3D printer spit one out six hours later. For now, it’s probably easier to ship over a crate of crutches than to print them on the spot. But that may change as printing becomes cheaper, faster, and more versatile.

“Yes, I think we could do it now, it would just take a lot of printers to do it,” Campbell said. “Every one of these print jobs can take anywhere from a couple hours to a day, so it depends on the exact type of printer, how rigorous you want the resolution, how good you want the quality to be at the end.”

If a situation isn’t immediately life-threatening, relief teams could take measurements of people with broken bones, input them into a system, and print out casts or splints. Relief groups would also be able to make only the supplies necessary for a certain situation, cutting down on shipping costs and waste. Some of the more advanced 3D printers can be rigged to run on solar power, so they may be ideal to use in areas where power lines have been cut.

It remains to be seen how feasible or cost-effective shipping a bunch of 3D printers to a disaster struck area is. But the technology is already helping out in many developing countries, and as commercially-available 3D printers fall below the $500 barrier, they will begin to become more common.

Comments Off on Is 3D Printing the Future of Disaster Relief? #3DThursday #3DPrinting