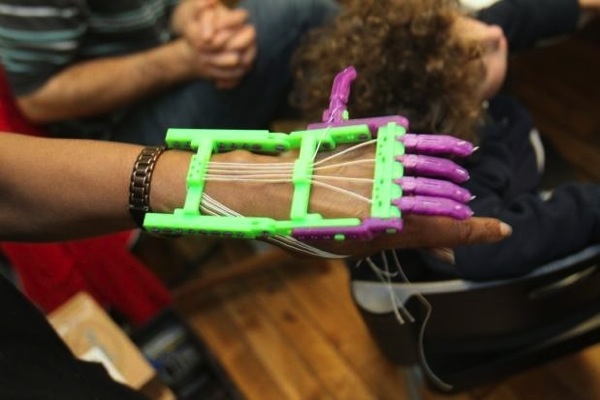 Here’s a chance to hear more about the 3DP Providence Prosthetics Build Party that was a part of #maketheworld’s final Hangout last week! Check out this piece from the Providence Journal, and then check out the MAKE coverage of the night below!

A toymaker, an industrial designer, a software developer and others gathered with a single purpose — to create functional, plastic “hands” for children who have lost their hands in war-ravaged countries in East Africa.

Many of the “makers,” as they call themselves, had lugged their own equipment to the AS220 Labs in downtown Providence. They’d work well into the night on three-dimensional printers, small machines the size of a microwave that heat plastic filament and then print it out in thin layers according to a detailed model developed on a computer.

On Friday, his “3DP PVD” group joined a larger, global collaboration called “Make the World: Prosthetics,” which held “virtual” gatherings this month for people interested in designing, improving and producing prosthetics. One of Stultz’s friends, toymaker Wayne Losey, of Providence, brought his two 3-D printers from home because he liked the idea of creating hands for children.

“This is a really ingenuous use of the machine,” Losey said. “So much of what’s being done in 3-D printing is sort of trivial — like phone cases — and this is meaningful….”

Read more of the Providence Journal story! And here’s a snippet from the MAKE piece by Anna Kaziunas France:

There was a tremendous response from the local maker community and all available tables were filled with printers. Many of the printers in attendance were built by 3DPP members during their “CastMax” (Mendel Max build using cast, not printed parts) build workshop. Nineteen 3D printers were transported by individual makers to the lab where they printed Michael Curry’s freshly updated version of the MakerBot Snap-Together Robohand, based on the Robohand project.

And here are some of Anna’s fun Vines of the event!

Make The World: Prosthetics was a one month program on Google+ aimed at crowdsourcing the manufacturing and delivery of printed prosthetics to people in need, hosted by Adafruit’s Limor Fried, Matt Griffin and Phillip Torrone. The Adafruit G+ Community Adafruit’s Makers, Hackers, Artists and Engineers Community under the subsection “Make the World” continues to provide a venue for this ongoing conversation — Join us there!

Want to catch up on what you missed? Check out all four sessions of the #maketheworld: Prosthetics hangouts here!