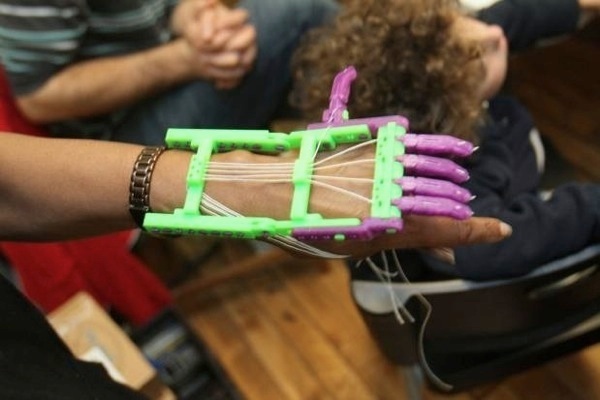 Matt Stultz and the members of the 3D Printing Providence group took it upon themselves to put together #maketheworld: Prosthetics Build Night and invite anyone in the area with a 3D printer to join them. Here’s a snippet from the MAKE post covering this project:

There was a tremendous response from the local maker community and all available tables were filled with printers. Many of the printers in attendance were built by 3DPPVD members during their “CastMax” (Mendel Max build using cast, not printed parts) build workshop. Nineteen 3D printers were transported by individual makers to the lab where they printed Michael Curry’s freshly updated version of the MakerBot Snap-Together Robohand, based on the Robohand project. (read more)

There are people making amazing things around the world, are you one of them? Join the 65,446 strong! And check out scores of projects they shared this week after the jump!

Jamie Laing shared: “This is a 3D printable case I’m working on for the Beaglebone and the BB-BONE-LCD3-01 touch screen. It’s printable in both PLA and ABS, just tweaking the buttons a bit before publishing on Thingiverse.” (read more) 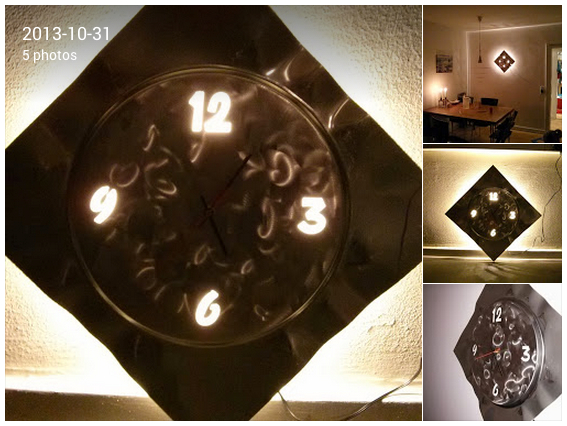 Michael Leon Schönholzer shared: “Finished my clock. It is metal spun test/scrap part from my work. I plasma-cut the numbers, made a back to mount the LED’s, removed the weld marks with an angle grinder and finally attached the LED’s to a 12v power supply. The movement is from the local craft store. I need to replace the black cable with a white one to get the full wife-approval, but at least it is allowed to stay in the house… 🙂 ” (read more) 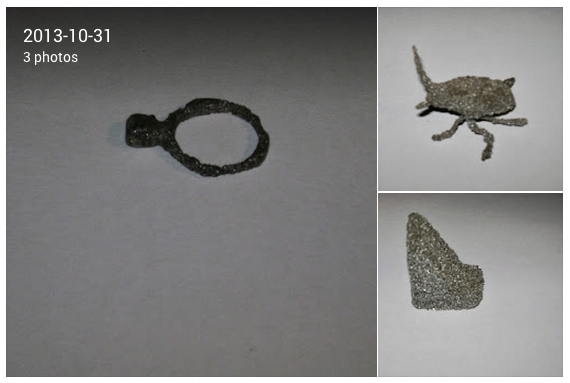 Mark Miller shared his experiments with a custom high voltage/electrostaic deposition printing process: “So these three sample pieces do not look like much…..But……I printed these in a 3D printer idea I am testing out. The printed parts are metal. I am using high voltage and electrostatic depositing…..sorta.. in a bizarre looking chamber with a rotating building pedestal, a hopper with a tube of fine metal particles(from my bandsaw), and did I mention high voltage? Lots of snapping, popping, and sort of a welding sound….but its fast. The shapes are pretty simplistic to start off, and as can be seen grainy finish, but much to my surprise stable enough to sand and machine a bit.
In the very early stages, will report more later…..Perfect project for Halloween night……Something, something DARK side…….” (read more) Very exciting! 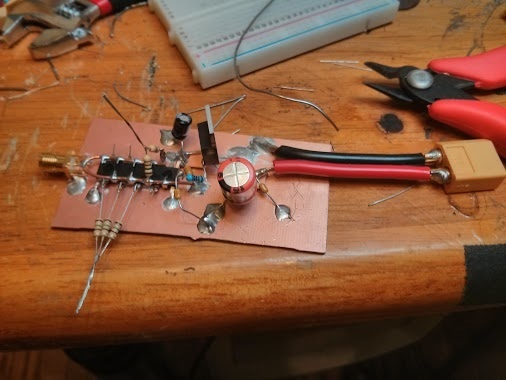 John Meacham shared a Manhattan style prototype of a project in progress, not a style of construction you see much in DIY projects! (at least with this degree of intentionality) “Distribution circuit for rubidium atomic clock. I don’t need no printed circuit boards. #makers #electronics #manhattanstyle” (read more) 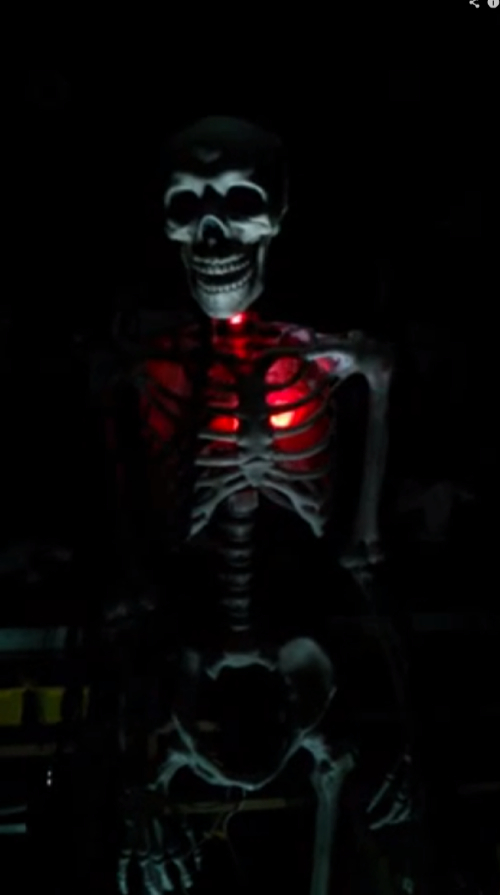 Tom Georgoulias shared: “I made this Halloween skeleton prop using an Arduino, a servo, relay, pir sensor, and a Halloween noise maker toy. When motion is detected, his jaw moves, his heart beats, and he makes a scary laugh sound while LEDs blink. #Halloween” (see video of it in action here) 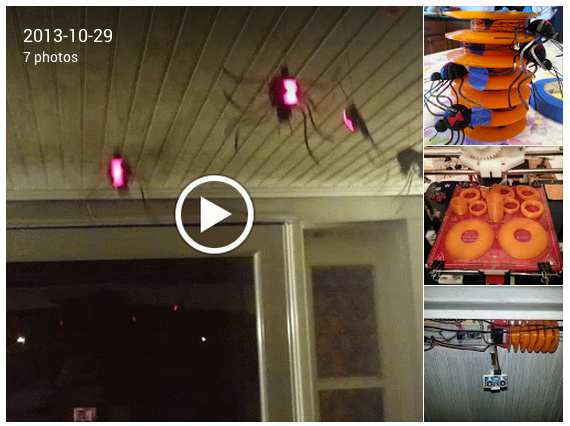 Last week we posted about his 3D printed spiders, this week Robert Wozniak shared the rest of his install: “These lighted flexible black widow spiders drop from the porch ceiling when nefarious beings come for candy. It uses a Teensy 3.0 with Ultrasonic sensor to detect the little monsters. This drives a Panucatt Stepper driver and a NEMA17 motor. The power for the LEDs is carried to the spiders through magnet wire spider webs.” (read more) 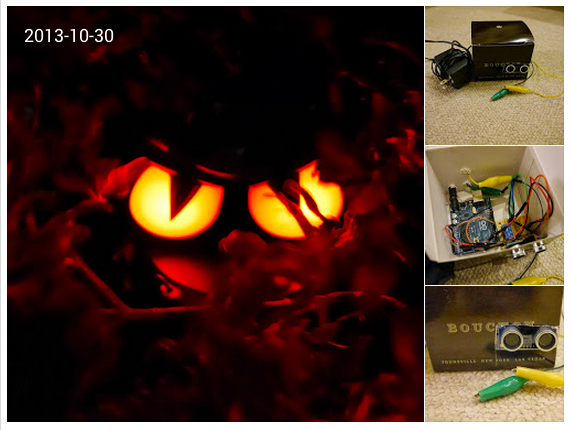 Cyrus Harrison shared: “For Halloween this year I really wanted to hijack/control a store bought halloween prop, starting with something simple — like triggering the prop via an ultrasonic sensor when kids walk by. I learned about the “Haunted Hedge”, available at Sprit Halloween pop-up stores and Target — a perfect beast for my project. I hooked up its “Try Me” button to an Arduino via a low current reed relay and with a few lines of code I had a Ping ultrasonic sensor triggering its glowing eyes and growl. I wired everything up in a hedge near my front door and tweaked the timing + distance trigger parameters to something sensible. What fun little project — looking forward to reactions from trick or treaters.” (read more) 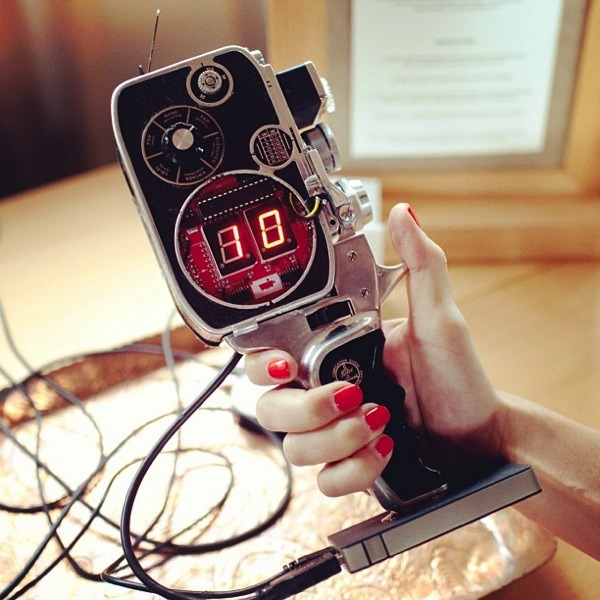 Kleebtronics used the Raspberry Pi to turn out-of-date objects into social-media-posting, digital machines, making some incredibly satisfying projects out of their opportunity to create a branding effort for Levi’s: “Each device needed to communicate with a web interface. We chose the Raspberry Pi as the brain inside each object. For the cameras, we used the Raspberry Pi camera module and programmed everything in Python. Each device had a built-in WIFI module, and we used mobile hot spots to communicate with the web as the train traveled across the country. Since the devices used specific social media platforms, we used RFID bracelets to allow the artists and musicians on the train to log in to their own accounts. Each device is outfitted with an RFID reader, and a custom-made emblem that identifies whether or not the user is logged in or not…” (read more)

maxx arshad got some help completing a build of Phillip Burgess’s Electronic Demon Costume from the Adafruit Learning System on the Adafruit Forums — and shared a video of his results back with us! “Hi, I managed to finish the work on the demon project. Thank a lot for your help during the project. Really appreciate it. I made a short video to show it working.” (read more)

Robert Dorsey shared his LED Elvis costume in the Adafruit Forums! Also, catch this video for a tech demo of the lighting patterns! “thanks for your quick and helpful replies. Check out my halloween costume…” (read more) 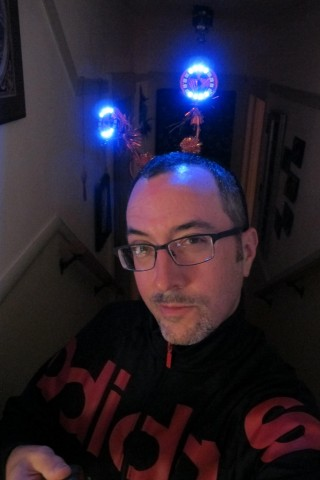 Dr_Speed on Flickr created these GEMMA NeoPixel ring antennae for Halloween. He also made a version with pixel stick! (read more) 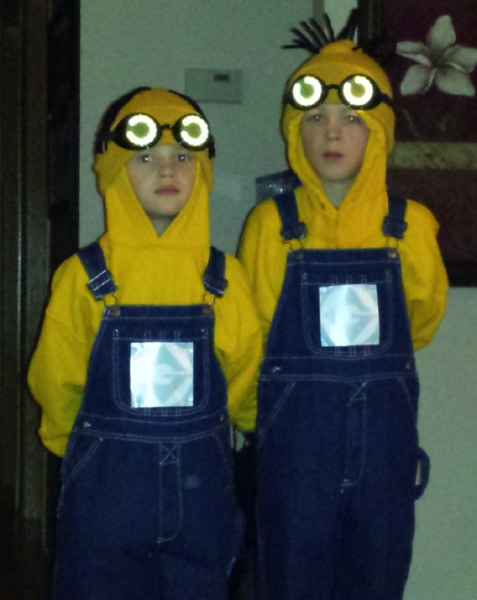 Forum member eagleeye2e made these adorable costumes for Halloween this year and we love that they used our tutorials in such a cool way. This is definitely a good project to learn for next year’s Halloween! “I thought I’d share the results of my recent project where I made Despicable Me Minion Halloween costumes for my kids. This project was inspired by the trinket powered goggles tutorial in the Adafruit Learning System. In addition to the goggles, I wanted the kids to have Minion sounds that they could trigger so I used an Adafruit wave shield with an MP3 speaker and a tactile switch. The wave shield/arduino uno/battery pack combo and the MP3 speaker fit in the hooded sweatshirt pocket and I ran some speaker wire up to and down the inside of an arm sleeve for the tactile switch which was safety-pinned to the cuff. The costumes have already generated a lot of praise as well as questions from friends and family. Thank you Adafruit for the great products and tutorials!” (read more) 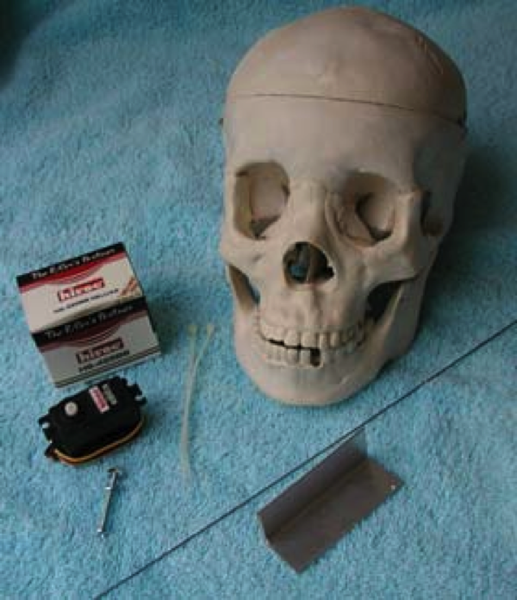 Here’s a tutorial from forum member rogerkaplan on how to make your scary Halloween skull decorations even more frightening: “There are a few circuits floating around the net for changing sound (either microphone or recording) into servo motion, usually to control an animatronic (I’m doing a talking skull). For the most part it operates on the amplitude of the sound. Since I’m a programmer rather than a hardware guy, I decided to do most of the work in software using an Arduino Nano which I had lying around. I figure that I can also improve the motion with some software fiddling (envelope following, possibly basic phoneme recognition)” (read more) 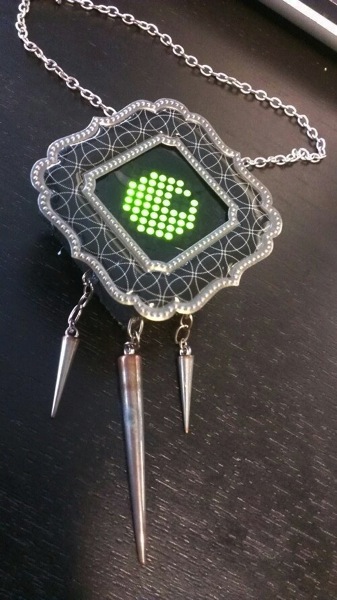 Here’s a gorgeous Space Invader Pendant created by Richard A+ and shared in the Adafruit Forums. The Technical Support Engineers Bill and Mike are both huge fans! “I didn’t have a project box that small so I just cut up the Adafruit box and hot glue gunned it up. I had some window tinting laying around to darken the unlit LEDs. The frame and other stuff was just in my junk bins. This is using a lithium Ion battery attached to a charging board. The switch on the side lets you turn it on or off and the button is attached to the reset on the Trinket. I made sure to cut a slot so I can access the mini USB on the Trinket to reprogram it.”